Synopsis: A young boy runs through the streets aiming to get a better view of the coming march to Winterfell of Jon Snow, Daenerys, and their entourage. Arya is nearby and gets a look at the Hound. Tyrion rides with Varys in a carriage. Missandei and Grey Worm get looks from the crowd. The North doesn’t trust outsiders, as Jon notes to Dany, but her dragons flying overhead awe everyone, including Sansa, waiting with Bran at the castle to receive them. Jon embraces his siblingcousins, and introduces Daenerys to Sansa, who is chilly. Bran tells everyone that the Night King has the dragon, the wall has fallen, and they ride. The Lords of the North meet with all the leaders. Young Lord Umber, whose home, the Last Hearth, is the nearest homestead to the dead army, asks for help evacuating the rest of his men. Lyanna Mormont calls out Jon for supporting Daenerys. Sansa questions supplies as she was not intending they would have to feed two new armies and dragons. Later, Sansa and Tyrion reunite. Sansa thinks Tyrion is foolish to believe Cersei would help. Arya and Jon reconnect at the godswood tree. In King’s Landing, Qyburn tells Cersei that the dead have broken through the wall. “Good,” Cersei replies. Euron taunts his prisoner, Yara, who is tied up on his ship. In the throne room, Cersei meets with Euron and Captain Strickland, the leader of the Gold Company army she just hired. She is disappointed that he hasn’t brought elephants. Euron suggests he and Cersei might seal the deal, but she tells him after the war. As she walks away, she rethinks her position and invites him back to her chambers.

Bronn is in the brothel when Qyburn interrupts. He has a mission from the queen. Qyburn gives him Joffrey’s crossbow and says he’s been tasked with taking out her brothers, plural. Back in her chambers, Cersei and Euron chill in the afterglow. Euron says he wants to give her a prince. On Euron’s ship, Theon stages a rescue mission and takes out a bunch of his men before untying Yara. She gives him a well-deserved headbutt before offering him a hand up. They sail back to the Iron Islands, but Theon wants to join the fight in the North. Yara supports him but will keep the Iron Islands as a safe outpost should they need a place to retreat. Davos talks with Varys and Tyrion about how Daenerys can win the Northerners loyalty. He suggests that Jon and Dany might be better off married. Despite all the urgency, Jon and Daenerys take a break to ride the dragons to a secluded spot where they can make out. Gendry makes the Hound an axe out of dragonglass. Arya and the Hound’s reunion is a tense face off, but she’s a little more flirty with Gendry. She shows him the designs for a weapon she’s hoping he can make her. Jon and Sansa argue his support of Daenerys. She asks if he bent the knee because he’s in love with her. Daenerys and Jorah come upon Samwell Tarly. She thinks him for saving Ser Jorah. He asks her for a pardon for stealing the books from the Citadel and the sword from his father. She admits that she put both his father and brother to death. Sam holds in his tears until he can be alone. Sam finds Bran who urges Tarly to tell Jon the truth about his parentage. 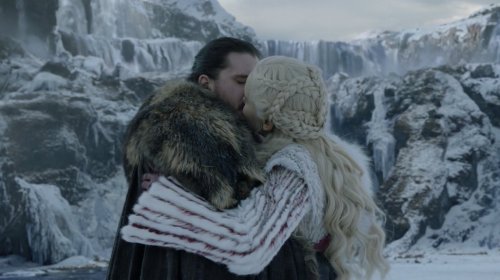 In the crypt, Sam finds Jon. He tells Jon that Daenerys executed his father and brother and wonders if he knew. Sam tells Jon what he learned, that he is Lyanna Stark’s son with Rhaegar, who were legally wed at the time. He was never a bastard. He’s Aegon Targaryen, the true heir to the throne. Tormund and Beric and a few others, who somehow survived being on top of Eastwatch as the wall fell, make their way to the Last Hearth. They see a trail of blood, but no dead bodies. They hear a noise but it’s just Eddison Tollet and some more crows. Inside the castle there’s a message left from the Night King: a dead Ned Umber, hanging on a wall next to a sea of limbs in the spiral shape we’ve seen before. But Ned isn’t quite as dead as he let, screaming as Wight until the men burn him. Jaime arrives in Winterfell and looks around until he sees Bran, the boy he crippled in the first episode, waiting for him.

Comments: Right from the beginning we see new opening credits. My friends and I frame-by-frame’d it to see the new scenes in the astrolabes: the comet coming and Daenerys and her three dragon babies, the Red Wedding, and the Wall coming down. We also have a lot less locations and go inside places, like the crypt in Winterfell and the dungeon in King’s Landing. We also see the Last Hearth, which we’ve seen before, but is central to this episode. Cersei  and Euron’s dalliance is interesting. Cersei made Tyrion and Jaime think she was pregnant, which she may or may not be. Was she sleeping with Euron to legitimize the baby she already has, using it to keep Euron under her control since it didn’t work for Jaime, or is she using him to get pregnant for real this time? I forgot what it was like to watch an episode in real time. There’s a definitely a different momentum to the show as it marches towards the end. There were so many callbacks to the first episode, with the arrival of a royal procession, Arya standing with the knights. We got reunions long expected-Arya and Jon-but also ones that I didn’t know would be so strong-like Tyrion and Sansa. The romantic moments with Jon and Dany felt out of place, but might be necessary with the coming tension of his true parentage. Sam being the one to tell Jon, especially after learning what Daenerys did to his family, made it all the more strong. Really, Jon Bradley was MVP of the episode, and really nailed his scenes. Although it was mostly building the story for the rest of the season, it was still a decent episode and welcome return for this show.

Sansa (to Tyrion): I used to think you were the cleverest man alive.

Arya: How did you survive a knife to the heart?
Jon: I didn’t.

Tyrion: The last time we spoke was at Joffrey’s wedding. Miserable affair.
Sansa: It had its moments.

Cersei: I wanted those elephants.

Davos: A proposal is what I’m proposing.

Title: Winterfell, where most of the action takes place.

Deaths: Theon and his men take out a bunch of Euron’s men. Poor Ned Umber is left behind as a warning from the Night King.