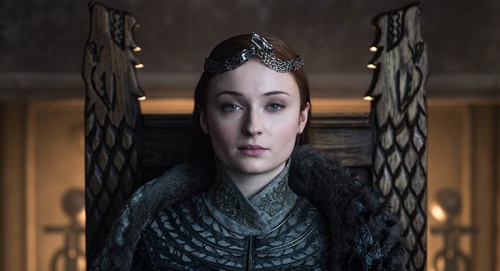 Synopsis: First off, we get our last ever opening credits change, showing Daenerys’ destruction of King’s Landing in the previous ep. As the actual episode begins, Tyrion wanders through the streets, surveying the damage. Charred bodies are everywhere. Shellshocked survivors wander around. Jon and Davos catch up to him. Tyrion says he’ll join them later, and Jon cautions it isn’t safe, but Tyrion keeps it solo. In the streets, Grey Worm and some Unsullied have captured Lannister prisoners and he sentences them to die. Jon and Davos try to stop them, the war is over they say, but Grey Worm maintains he is following his queen’s rule. Before another fight breaks out, Davos pulls Jon away to speak with the queen, but Grey Worm slits the prisoners’ throats regardless. Tyrion continues through the remains of the Red Keep. He continues on to the dungeon where he finds a pile of rubble and a golden hand. Under the rocks, he unearths the bodies of his brother and sister, and cries. Jon moves through the (seemingly growing) Unsullied and Dothraki armies at the entrance to the Red Keep. He marches up to the top of the steps where Grey Worm waits. Drogon flies overhead dropping Daenerys down in front of the armies. She gives an impassioned speech, thanking her men for helping her take the seven kingdoms. She appoints Grey Worm her new Master of War. She tells the armies that the war is not over and they will continue their liberation beyond the seven kingdoms all over the world. Tyrion arrives to catch the end of the speech. He approaches Daenerys cautiously. She says he freed his brother, committed treason. Tyrion says he did, but she slaughtered a city. He rips off his hand pin and tosses it aside. Targaryen has her men take Tyrion into custody. Dany and Jon share a look before she walks off without a word.

END_OF_DOCUMENT_TOKEN_TO_BE_REPLACED

Tagged as game of thrones, the iron throne 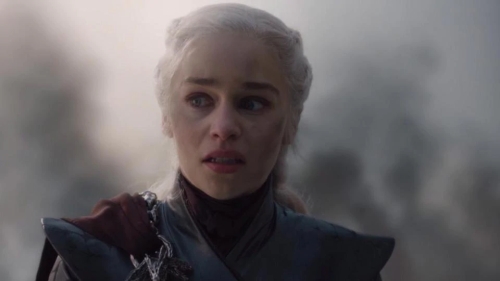 Synopsis: Varys is writing letters out. Hard to make out all the words but “true heir” is certainly a focus. One of his little birds arrive. Daenerys isn’t eating, she says. Apparently Varys had someone trying to do his dirty work. Tyrion watches as Varys meets Jon who arrives at Dragonstone. Varys express his fears of Daenerys, but Jon confirms his loyalty to her and that he has no interest in the throne. Tyrion meets with Daenerys. She ain’t looking so hot. She says she knows someone has betrayed her: Jon Snow. Tyrion swears it’s Varys but Dany says that it was Jon telling Sansa that was the betrayal. Daenerys also blames Tyrion, but he swears his intentions were good. Later, Grey Worm comes for Varys. On the beach, Tyrion confirms for Varys that he was the one. Varys says he hopes that he’s wrong, and says goodbye to Lannister.

END_OF_DOCUMENT_TOKEN_TO_BE_REPLACED

After the fervor around Endgame has settled down and everyone and their brother has seen the movie (twice), I thought I’d discuss the film in a bit more depth and go full-on spoilers. If you’re one of the six people that haven’t seen it and actually care, stop reading now.

After twenty-two movies, thirty-some main characters and over a decade of character growth and plot twists leading into this movie, directors Joe and Anthony Russo have really achieved the impossible: they made a mostly satisfying, surprising, and certainly worthy culmination to the Avengers saga that began all the way back in 2008 with the first Iron Man. Every issue I had with last year’s Infinity War (and there were a lot) seemed to be addressed here in one form or another. Instead of tackling the movie in order, I’m just going to separate everything by topic.

END_OF_DOCUMENT_TOKEN_TO_BE_REPLACED

Former teen heartthrob Zac Efron has done everything he can to shed his High School Musical baggage, and he’s done a good job of making interesting choices, leaning into his chiseled features and roguish charm while playing against type. Extremely Wicked, Shockingly Evil and Vile follows Efron as Ted Bundy, the notorious serial killer who was finally brought to justice. While the movie purports to be about Liz Kendall (Lily Collins), Ted’s ex-girlfriend and the one who tipped off police to his presence, he doesn’t seem that interested in her as a person, but only her connection to the handsome murderer.

END_OF_DOCUMENT_TOKEN_TO_BE_REPLACED

What a shocking and unexpected waste of talent, both in front of the camera and behind. Wine Country is well intentioned, but it feels like they shot a first draft and planned to put all the jokes in another version. It doesn’t make any sense how you get arguably the best female comedy talent out there (save Melissa McCarthy, Christina Applegate and Julia Louis-Dreyfus) and whiff it with such a lackluster, uninteresting tale of female friendship in adulthood.

END_OF_DOCUMENT_TOKEN_TO_BE_REPLACED

Under the Silver Lake

Picture a Hollywood noir film, that is an homage to Hitchcock through the mind of David Lynch, and that’s kind of what you get with Under the Silver Lake. Written and directed by David Robert Mitchell, who rose to prominence with his indie horror flick It Follows, Silver Lake follows Andrew Garfield’s Sam, an out-of-work douchebag who is intrigued by Sarah (Riley Keough), a neighbor in his apartment complex who goes missing the day after he meets her. Oh, there’s also a serial dog killer, a naked Owl Lady, a piano man responsible for every song in the history of pop music, and even that is still barely scratching the surface.

END_OF_DOCUMENT_TOKEN_TO_BE_REPLACED

Tagged as andrew garfield, riley keough, under the silver lake

Game of Thrones – Episode 8.4 “The Last of the Starks”

Synopsis: After the devastation of the last episode, we begin this one saying goodbye to the fallen. The good guys prepare a funeral for the men and women that died in the battle against the night king, dozens of pyre’s are set up, with Daenerys getting a final moment with Jorah, and Sansa pinning a Stark pin on Theon. Jon offers a eulogy, as the survivors look on, then they set fire to the bodies. In the great hall, there’s a quiet celebration until Daenerys spots Gendry and loudly proclaims him a true Baratheon and offers him Storm’s End. Everyone offers their cheers and the dinner grows more celebratory. Tyrion notes to Daenerys that making him Lord ensures his support. Sansa seems to have also put that together herself. Jaime toasts with Brienne. Davos and Tyrion talk of Melisandre. Tyrion sidles over to Bran, calling him the Lord of Winterfell, but Bran notes that he doesn’t want the position. He doesn’t want anything. Jaime, Brienne, Tyrion, and Podrick play a drinking game. Tyrion surmises that Brienne is a virgin, but she excuses herself. Tormund tries to get close to Brienne, but Jaime blocks him and follows her out. As Tormund celebrates Jon, Dany notes how much respect Jon claims in the North. Varys catches on. Sansa and the Hound reconnect. Clegane notes how much she’s grown since their time together in King’s Landing. Clegane suggests things might have been different if she left with him, but she says what’s happened made her who she is. The revels continue as Gendry searches for Arya. When he finds her practicing her archery, he tells her that he’s been legitimized and proposes to her. She kisses him, but lets him down gently. Being a lady is not her. Jaime finds Brienne in her chambers, and they consummate their relationship.

END_OF_DOCUMENT_TOKEN_TO_BE_REPLACED

Tagged as game of thrones, last of the starks 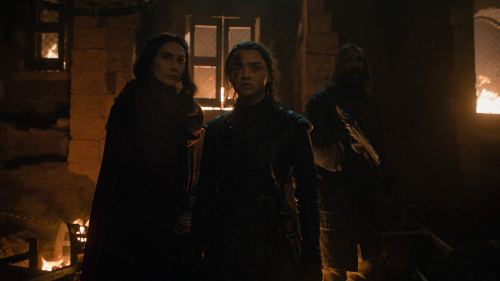 Synopsis: We start off without any “previously on” as pretty much the entire series has been leading up to this. Post credits, we start with Samwell preparing for battle. As he trudges through Winterfell, Lyanna, Tyrion and others prepare their stations, as Theon takes Bran to the Godswood. Arya and Sansa watch from the castle walls as the Dothraki and Unsullied lineup. Grey Worm, Tollett, Jorah, the Hound, Jaime, Gendry, Brienne, Podrick, Beric, and Tormund all take their places. Jon and Daenerys stand by with their dragons on a nearby hill. Soon, a mysterious figure arrives on horseback. It’s Melisandre. She sees Jorah first and tells him to tell the Dothraki to lift their weapons. He does, they do, and with some hocus pocus the Dothraki arakhs ignite across the army. The Red Woman moves inside the gates where she comes across Davos. He grips his sword, but she assures him there’s no need to kill her, she’ll be dead by morning. The Dothraki with their flaming weapons charge forward towards their enemy as the others look on from afar they see the flames, along with the Dothraki, snuffed out. A few horses, Jorah and a handful of Dothraki retreat back. Behind them, a swarm of dead follow and the chaos and fighting begins. Daenerys jumps on Drogon and into the fray, lighting up the undead. Jon follows on Rhaegal. He sees the White Walkers holding back.