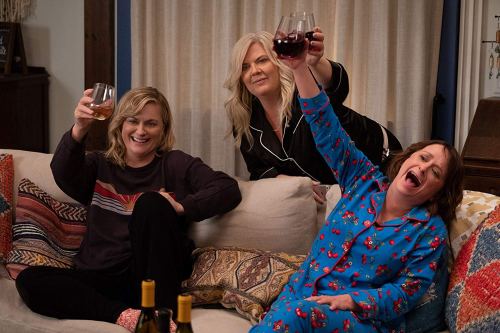 What a shocking and unexpected waste of talent, both in front of the camera and behind. Wine Country is well intentioned, but it feels like they shot a first draft and planned to put all the jokes in another version. It doesn’t make any sense how you get arguably the best female comedy talent out there (save Melissa McCarthy, Christina Applegate and Julia Louis-Dreyfus) and whiff it with such a lackluster, uninteresting tale of female friendship in adulthood.

Written by Liz Cackowski (Community, Last Man on Earth, SNL) and Emily Spivey (SNL, Last Man on Earth, Up All Night), directed by Amy Poehler, and starring Poehler, Spivey, and their SNL pals Maya Rudolph, Ana Gasteyer, Rachel Dratch, Paula Pell, and Tina Fey, Wine Country suffers without a decent point-of-view, and even less of a point. Dratch’s Rebecca isn’t thrilled about turning the big five-oh, and Poehler’s Abby invites all of their friends on gal’s weekend in, natch, wine country. Drunken antics ensure, but sadly, very little hilarity. While the characters are well-drawn and have the perfect setup for shenanigans, very little is done with them. Abby is a type-A planner who just lost her job. Gasteyer’s Catherine is a big reality-TV star on the brink of a new deal, Rudolph’s Naomi is a mom waiting on test results. Pell is a lesbian crushing on a waitress she meets (Pen15’s Maya Erskine). The storyline checks every box you’d expect. They get white-girl wasted, they argue, secrets come out, and then they tumble down a hill and everything is swell. Fey barely shows up as the owner of the Airbnb the girls rent.

I get what Wine Country is trying to do, and I also get that it wasn’t made for me, but I think it’s unfortunate that for an underserved audience, there are so few decent female ensemble comedies. There’s, what, Bridesmaids and Girls Trip? Poehler is deft at directing, she has some great episodes of Parks and Recreation under her belt, but for a feature it’s mostly uninteresting, lingering on faces too long, ignoring the lush landscape, and feeling mostly static. The women all are believable and give depth to their characters that really isn’t there on the page, but as tart-tongued as Spivey is, her character seems wholly unnecessary. There are a couple funny moments. The film could’ve used a few dozen more. Jason Schwartzman and Cherry Jones also pop in, but even they can’t make Wine Country feel anything other than dull.