Synopsis: We start off without any “previously on” as pretty much the entire series has been leading up to this. Post credits, we start with Samwell preparing for battle. As he trudges through Winterfell, Lyanna, Tyrion and others prepare their stations, as Theon takes Bran to the Godswood. Arya and Sansa watch from the castle walls as the Dothraki and Unsullied lineup. Grey Worm, Tollett, Jorah, the Hound, Jaime, Gendry, Brienne, Podrick, Beric, and Tormund all take their places. Jon and Daenerys stand by with their dragons on a nearby hill. Soon, a mysterious figure arrives on horseback. It’s Melisandre. She sees Jorah first and tells him to tell the Dothraki to lift their weapons. He does, they do, and with some hocus pocus the Dothraki arakhs ignite across the army. The Red Woman moves inside the gates where she comes across Davos. He grips his sword, but she assures him there’s no need to kill her, she’ll be dead by morning. The Dothraki with their flaming weapons charge forward towards their enemy as the others look on from afar they see the flames, along with the Dothraki, snuffed out. A few horses, Jorah and a handful of Dothraki retreat back. Behind them, a swarm of dead follow and the chaos and fighting begins. Daenerys jumps on Drogon and into the fray, lighting up the undead. Jon follows on Rhaegal. He sees the White Walkers holding back.

Arya tells Sansa to get down to the crypt. She gives her older sister a dragonglass dagger. Theon and his men wait with Bran. Everyone fights in the front lines, and Sam is overcome by a number of the dead. Edd saves him and after Sam makes it back up, he sees Tollett take a sword, the first to fall. Sansa joimns Tyrion and the others in the crypt. On the dragons, Jon and Daenerys are caught up in a snowy windstorm. Brienne and Tormund call their forces back. Inside the castle walls, Lyanna holds the line as the survivors rush back in. Grey Worm and the Unsullied protect the retreat from the dead army. Davos signals for Daenerys to light the trenches, where they have set up spiked formations, but she can’t see it. The men on the ground try to light them on their own, but have trouble doing so. Melisandre returns to the field and uses her magic once again to setup a flaming barrier between Winterfell and the army of the dead. It’s successful as the army holds behind the fire. Varys, Tyrion, and Sansa struggle being away from the action, but Sansa assures her ex-husband that he’s better off being away from the battlefield. Sansa assures Tyrion that it would never work between them as they would always have divided loyalties with Daenerys. Missandei overhears and tells them they’d all be dead without the dragon queen. Theon apologizes to Bran, but Bran says everything he’s done has brought him there. Bran wargs into nearby ravens and sends them into the field, hoping to draw the Night King out. The dead army uses their sheer numbers to smother the flames, creating spots for others to cross. Davos shouts to man the walls and most of our heroes move to the walls to stand guard and continue to battle with the dead.

The Hound has found a quiet corner as he has a panic attack with all the fire around. Beric finds him and tries to get him to return to the battle, but he can’t move. Arya, with her handy new weapon that Gendry made her, takes out a boatload of the dead, but is soon overrun. Beric shows this to Clegane who jumps back into the fray to save Arya. Lyanna is at the gate when the dead giant smashes his way, knocking her aside. She rallies up and as the giant grabs her, slowly crushing her bones, she manages to give him the old dragon glass in the eye bit to drop the enemy before she falls to her death. In the clouds, Jon and Daenerys face off with Dark Viserion. Arya sneaks around Winterfell, moving into the library, where she goes into stealth mode, and outmaneuvers the dead as she makes her way to the exit. Before she gets too far, another horde has found her and she’s darting through the halls of Winterfell, a number of zombies on her trail. In the crypt, Sansa and the others listen as the sounds of the battle grow closer. The Hound and Beric discover Arya, saving her once again from the dead chasing her, with Beric taking a number of stabs along the way. As they retreat into a small room (the hearth from the previous episode I believe), they discover Melisandre while Beric takes his last breaths. She says Beric was continually brought back with a purpose, but now that purpose has been served. Arya remembers Melisandre and she gives the young Stark a fairly decent pep talk as the dead continue to push their way in. Arya leaves with purpose.

Theon and his men boss up as the dead make their way to the godswood. The Night King barrels through Winterfell on Viserion towards Bran, but Jon and Rhaegal are on his tail. The dragons duke it out in the air, and Rhaegal crash lands, knocking Jon to the ground. The Night King has left Viserion and Dany finds him, giving Drogon the command to burn him, but the dragon fire has no effect. Jon follows the Night King on foot, but as he gets closer, the Night King raises his arms, raising not only the fallen soldiers from the side of good, now on his side, but also inside the castle as Jaime, Brienne and the others start to battle their fallen comrades, including Lyanna and Tollett. Soon in the crypts, the long dead start clawing their way out of their graves. The Night King continues towards Bran, with the White Walkers now joining him. Theon continues to fight off everyone coming towards Bran. Jon is saved by Drogon. As he runs toward Bran, dozens of dead glom onto Drogon, as he struggles to take flight, he shakes off everyone including Daenerys, who falls right into the middle of the dead. Thankfully, Jorah is there to help her out. Jon pushes through the battle inside the castle as he struggles to get to Bran, even bypassing Sam as he’s fighting off a bunch of zombies. As Jorah cleaves a path for them, Dany picks up a sword and joins him. Sansa and Tyrion take refuge in the crypt, hiding behind a casket, as she brandishes the dagger Arya gave her. Jon nears Bran, but Dark Viserion drops down into his path. 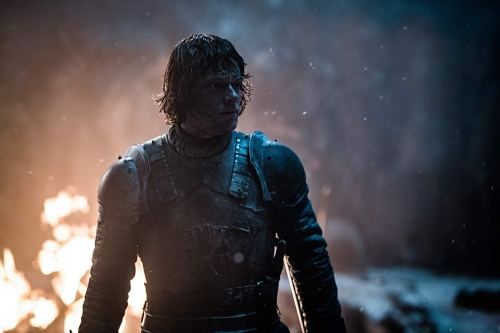 Theon has fought off the dead army, but the Night King now makes his way toward Bran. Jorah takes a few too many hits and falls. Bran returns and absolves Theon of his past misdeeds, thanking him. Theon charges toward the Night King, who abruptly does away with him. The Night King makes his way to Bran, and he stands face to face with him. Jon screams at the Dragon. The Night King reaches for his sword, but before he can grab it Arya is jumping towards him. He turns around, grabbing her by the neck, she drops her dagger, but catches it in her other hand, plunging it into the Night King’s gut. He shatters in ice. The White Walkers follow suit. And the dead army falls. Jorah also falls, dying in Daenerys’ arms. Melisandre walks outside the castle, with Davos behind her. He clutches sword, but watches as she walks through piles of dead. Ripping off her necklace, she walks toward the sunrise, as she turns into a frail old woman and falls down.

Comments: A surprisingly divisive episode, understandably so. It was built up as the culmination of the entire series and while the ending made me shout out, it does feel a bit abrupt and awkward, but more on that in a bit. While I’m a bit on the fence, I both feel and hope that there is more to the story that we haven’t seen yet, I think the show needs to stick the landing with the next three episodes in order for this one to be held up as a strong episode. In and of itself, it is a massive achievement but it has a lot of issues.

I still hold out hope that there’s another shoe about to drop. Something that will make sense, but will also be surprising and add weight and depth to what we’ve seen so far, and will make this battle and this episode stronger in hindsight. Given its proximity to the end (only three more episodes!), I’m willing to give it a chance and withhold final judgment until then.

Quotes:
Arya: Take this and go.
Sansa: I don’t know how to use it.
Arya: Stick ‘em with the pointy end.

Varys: At least we’re already in a crypt.

Tyrion: Maybe we should’ve stayed married.
Sansa: You were the best of them.
Tyrion: What a terrifying thought.

Melisandre: Here we are, at the end of the world.

Melisandre: What do we say to the god of death?
Arya: Not today.

Title: The Long Night is both in reference to the battle the good guys face, and the duration of it, but also harkens back to the previous fight against the White Walkers hundreds of years before. It might also suggest the nap that Jorah and the others are about to take.

Deaths: Dolorous Edd Tollett dies saving Sam. Lyanna goes down after dropping a giant. Beric dies after rescuing Arya. Theon dies protecting Bran. Jorah drops saving Daenerys. Arya takes out the Night King and in doing so, the White Walkers and the army of the dead. Melisandre, dies alone after exhausting all of her power. I also think we saw the last of Alys Karstark who was seen with Theon, but don’t have confirmation either way.