Game of Thrones – Episode 7.7 “The Dragon and the Wolf” 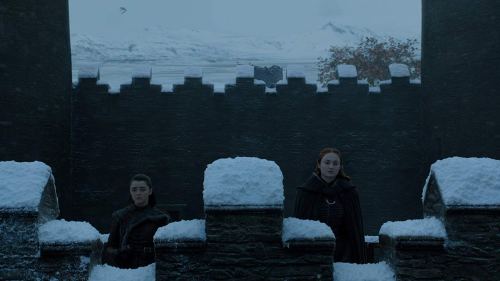 Synopsis: The Unsullied and Dothraki armies arrive at the gates of King’s Landing. Bronn and Jaime ready their men. On a ship, Tyrion, Jon and Davos pass Euron’s fleet. The Hound checks the box with his dead prisoner. Still kicking. Cersei tells the Mountain to ready himself should things go south. Tyrion, Missandei, Davos, Jorah, Varys, The Hound, and their Dothraki honor guard march to the Dragon Pit. On their way, they run into Bronn and the Lannister support staff with Brienne and Podrick in tow. Tyrion reunites with Podrick, Brienne with the Hound. The group arrives and awaits the arrival of the queens. Podrick and Bronn take their leave. Cersei arrives with Qyburn, Euron, Jaime and the Mountain and we have a shitton of main characters reuniting or seeing each other for the first time. The Hound threatens the Mountain. Cersei questions where Daenerys is, but she soon arrives on dragonback. Tyrion begins with the presentation, but Euron interrupts, telling Theon he’s got Yara and making fun of Tyrion. Cersei orders Euron to sit. Tyrion lays out the history, and Job explains the army of the dead. You have to wonder if they rehearsed this power point on the ride over. Cersei says she doesn’t believe the stories and she will not agree to a truce. The Hound enters with his crate and kicks out the wight, who charges toward Cersei (no one, it should be noted, jumps up to protect her). The wight is held back by chains, and the Hound chops him in half, but he keeps coming. Qyburn examines a severed hand, still moving. Jon sets it on fire, demonstrating the ways to kill them, finishing the wight off with dragonglass. Daenerys says she didn’t believe it herself until she saw them, and says there were a hundred thousand at least in their army. Euron nopes on out of there, saying he’s taking his fleet back to his island. Cersei says she will agree to the truce if Jon Snow agrees that the North will remain neutral. Jon says he can’t do that, he’s already sworn allegiance to Daenerys. Everyone winces because Snow couldn’t trouble himself to lie just a little bit. Cersei says no deal and storms out. Brienne asks Jaime to talk to Cersei.

Jon’s team is disappointed he lost the deal. Tyrion decides to make a last-ditch effort to see Cersei himself. Tyrion makes his way to Cersei, passing Jaime along the way. Cersei doesn’t give him a warm reception. She is still pissed he murdered their father, and blames Tommen and Myrcella’s death on him because he weakened the Lannister name (neglecting that Tommen killed himself because of her actions, but that’s neither here nor there). Tyrion dares her to kill him, bold choice, but she doesn’t. He pours them each a glass of wine. He offers condolences for the kids, even though she doesn’t want to hear it. He presses her to see reason, even though he’s supporting her enemy. He guesses that she’s pregnant (or that she wants people to think she’s pregnant). As they wait, Jon apologizes to Daenerys. She appreciates his support, and they both put their faith in each other. Dany tells Jon she can’t have kids, but he doubts if it’s a fact or not. Tyrion returns, with Cersei behind him. Cersei agrees to send her armies North to help them fight. Sansa laments to Littlefinger that Jon Snow has agreed to support Dany. He thinks their alliance weakens Sansa’s position and tells her that she should take Winterfell from Jon, she’s a true Stark after all. Arya would never go for it, she says, but Baelish suggests she’s assume the worst about Arya and act accordingly.

Back at Dragonstone, Daenerys and her team work through going to Winterfell. Jon thinks they should sail together to send a message of support to the people and meet the armies on the way. She agrees. After, Theon talks to Jon. They talk of honor and Ned, and their history of mistakes. Theon wants to do the right thing, starting with rescuing Yara. Jon gives his support. Theon sees the remaining ironborne on the beach and rallies them rescue their queen. Harrag thinks they should simply return home, so Theon kicks his ass. Actually, Harrag kicks his ass first, but Theon keeps getting back up and beats him to death. He asks the others if they are with him and they are. Sansa has Arya brought to the great room with the Lords of the North and Bran. She reads a list of crimes, but it’s a fakeout and really an indictment of Baelish. She accuses him of murdering Lyssa, of having her kill Jon Arryn, of having her fake the note to Catelyn that set the whole series in motion. Baelish pleads his case, but Bran and his supervisions make it difficult to lie. Littlefinger begs for mercy, but Sansa sentences him to die and Arya slices his throat. Jaime prepares his generals for their expedition North as Cersei arrives. She sends the men away and then calls Jaime stupid for believing they would actually help the Starks and Targaryens. She was lying. Cersei tells him that Euron is actually still in her command, on his way to Essos to get the Golden Army she got in her deal with the Iron Bank. Cersei threatens him, but Jaime turns against her, vowing to uphold his promise to ride North and help their armies. He leaves her in disgust, riding north alone, as snow begins to fall in King’s Landing.

Sam arrives in Winterfell and reunites with Bran. He tells him that he sees everything, but he still asks why Sam has come. They compare notes and Bran tells Sam about Jon’s true parentage, that he’s the bastard son of Rhaegar and Lyanna. Sam corrects him and tells him about Rhaegar’s annulment and subsequent wedding to Lyanna. Bran jumps back to see the wedding. Robert’s Rebellion was built on a lie, Rhaegar loved Lyanna. Jon isn’t a bastard but the true heir to the Iron Throne. As they sail back to Winterfell, Jon and Daenerys give in to their passion and bang it out, not realizing that she’s his aunt. Arya and Sansa regroup after the Littlefinger incident. They express their support for each other, and remembering Ned’s words about sticking together. Bran wargs into a raven and checks up on Eastwatch. Tormund and Beric are at the tower when the army of the dead arrive. They sound the alarms. The Night King rides in on an undead Viserion’s back, as his fire destroys Eastwatch-by-the-Sea. And the wall comes tumbling down. The army of the dead slowly marches to the other side.

Comments: Another banger of an ending. The wall coming down makes sense, but it was not something I expected to see even though, duh, it had to happen. It feels like season 8 could just be one big battle in six parts but there’s still plenty of other story to go around. Theon’s redemption comes. He’s lost his mojo ever since Ramsay got a hold of him and after a series-long list of bad decisions, he finally gets to do the right thing. I’m hoping he makes it back up north with Yara soon enough. Seeing all the main characters together for the first time was amazing, as it should be with seven years of buildup. Cersei and Dany glare off. Jaime and Brienne have softer looks. Cersei and Jon meet for the first time in the latest iteration of the Stark vs. Lannister showdown. It all leads into the great scene between Tyrion and Cersei and Peter Dinklage (who got his third Emmy for this episode) and Lena Headey are at the top of their game here. Of all the actors that will go unrewarded for this series, Headey will be the most disappointing for me. If anything, she can join Steve Carell, Amy Poehler, Martin Sheen, Sarah Michelle Gellar, Connie Britton, and a slew of others to go unrewarded for the iconic performances. Sansa and Arya’s audience fakeout culminates with the death of Littlefinger. And he went out as he lived, like a bitch. It was greatly in character to have Petyr being such a weak, whiny twat. We won’t get any more scenes between him and Varys, which is a shame, but it was definitely time for him to go. The payoff was certainly exciting and executed well, but it still doesn’t make up for the dumb scene in the previous episode. It is great that Arya and Sansa have each grown into these smart capable women, and that scene tried to undo all of that just to fuck with the viewers. It’s still frustrating. Still, it’s worth noting a couple things. One, with all the emphasis on Jon’s parentage, the whole idea that Robert’s Rebellion was built on a lie got a little lost. This is huge, as it negates the entire succession of Robert’s rule-Joffrey, Tommen, and Cersei are all invalid-and Jon/Aegon is less usurper than true successor, with Dany coming in second place. Curious if she will support his reign and only become queen if they wed, and assume rule if he dies, a bittersweet victory. Or maybe King’s Landing will simply fall in the wars to come and whatever the show does in the end will come from a completely unexpected place. It can be difficult to craft an ending for a long-running series, especially one with source material in another medium. It is expected to have an ending that is both logical and surprising, and those two things are really hard to pull off together. Breaking Bad did it. Buffy did it. I’d argue Battlestar Galactica did it, though I’m only one of six people that seemed to like that one. This is where Lost failed. The surprise was a theory floated early on, and the logic didn’t hold up to six years’ worth of needless tangents. Best of luck to Game of Thrones. I can’t wait.

Also to those that asked, and bothered to read this much, I will be reviewing the new season as well, probably posting on Mondays.

Quotes:
Cersei (to the Mountain): If anything goes wrong, kill the silver-haired bitch first. Then our brother, then the bastard who calls himself king. The rest of them you can kill in any order you see fit.

The Hound: Seems every bad idea has some Lannister cunt behind it.
Tyrion: And some Clegane cunt to help them see it through (as Cersei enters with the Mountain)

The Hound: Remember me? Yeah, you do. You’re even fucking uglier than I am now. What’d they do to you? Doesn’t matter. That’s not how it ends for you, brother. You know who’s coming for you. You’ve always known.

Tyrion: That is indeed a problem. The more immediate problem is that we’re all fucked.

Cersei: No one walks away from me! (despite two people doing it in this episode)

Sansa: Thank you for all your many lessons, Lord Baelish. I will never forget them.

Jon: Your family hasn’t seen its end. You’re still here.
Dany: I can’t have children.
Jon: Who told you that?
Dany: The witch who murdered my husband.
Jon: Has it occurred to you she might not have been a reliable source of information?

Bran: I remember everything.

Title: The dragon is the sigil of House Targaryen, and the wolf is House Stark. Can represent Dany and Jon getting nasty with each other, and Rhaegar and Lyanna coming together.

Deaths: Theon beats Harrag to death finally getting his balls back (figuratively). It’s unclear if Tormund and Beric survived the wall coming down, but I would assume at least Tormund is in the clear. Arya carries out Sansa’s death sentence on Baelish.