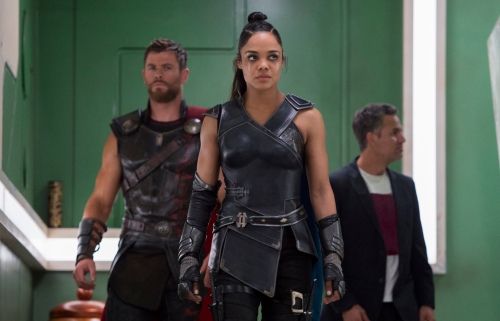 Despite my self-admitted fanboyism of all things superhero in general and Marvel in specific, I can be either instantly engaged with the latest men in tights flick or overly critical. The truth is, I haven’t liked more Marvel movies than I’ve loved. The first two Thor movies were crap, aside from perfect casting there is nothing I enjoyed in three Iron Man movies, save for thirty seconds of Black Widow in number 2 (the worst of the three). I was disappointed in the first Captain America and Doctor Strange. The trailers for Thor: Ragnarok painted a different picture for the third installment of the Asgardian thunder god, a more lighthearted and on the road style flick. In short, Ragnarok is easily the funniest movie in the MCU, and second only to Deadpool in comedy in the overall superhero library.

The statuesque Chris Hemsworth has always been a decent embodiment of the comic book version of Thor, making his Shakespearean prose feel at home next to Iron Man’s wit. However, it feels like Ragnarok Director Taika Waititi (Hunt for the Wilderpeople, What We Do in the Shadows) really saw the comedic gifts in Hemsworth and dialed them up to 11, even if they don’t necessarily fit with the character. Every opportunity for a joke, they throw one in, and it makes for an entertaining ride even if there’s not much of a story.

Thor and half-brother/arch-nemesis Loki (the always delightful Tom Hiddleston) learn from their father Odin (Anthony Hopkins) that they have a sister, Hela (Cate Blanchett), who is returning to Asgard after decades of banishment, and she’s pissed. Thor and Loki get sidetracked in their first sibling fight with Hela and stuck on a slave planet, Sakar, where Thor is pitted in a gladiator style cage match against his avenging teammate Hulk (Mark Ruffalo). He crosses path with another Asgardian, the drunken bruiser Valkyrie (Tessa Thompson). He rallies his pals for the final fight against Hela. And…that’s about it. But it’s funny. Oh, god it’s funny, whether it’s an endless series of one-liners, brilliant sight gags, .

Blanchett is given little to do but snarl, but she’s at least a formidable and interesting foe, and it’s at least progress that a Marvel movie finally has a worthy female villain. I was leery of Thompson’s casting, not because the black Thompson is a far cry from the blonde-haired blue-eyed comic book counterpart, but more because the former pal of Veronica Mars didn’t seem like the right fit. Boy, was I wrong. She bursts onto the scene and owns the character, and nearly walks off with the whole movie. Her Valkyrie is complicated and intriguing and has great chemistry with Hemsworth and Ruffalo, and is a badass in a movie that is filled with them. Ruffalo’s Hulk is a welcome foil for Thor, but isn’t as big of a presence as the trailers suggest. Idris Elba’s Heimdall returns, and is much more integral character to the film as a whole, finally given something to do, albeit briefly. Jeff Goldlum is a welcome addition as the alien goofball known as the Grandmaster.

Despite the comedy, there is actual consequence to the film, which is nice. Not since the second Captain America has it felt like the shared universe has actually been affected by what’s unfolded on screen. The brotherly dynamic between Loki and Thor is messy and complex and served well by the playful chemistry between the actors. Visually, the film has a lot more color and magnitude in exploring the other worlds, only a few moments take place on Earth. The comedy certainly carries the film, which makes it entertaining, and worth endless rewatching, but it doesn’t have the weight to really make it great beyond that.