Game of Thrones – Episode 7.6 “Beyond the Wall”

Synopsis: Jon and his crew travel beyond the wall (natch), in search of dead things. Gendry is excited to see snow for the first time (the white stuff, not Jon). Jon updates Tormund on Daenerys. Gendry whinges about Thoros selling him to Melisandre, which the Hound calls him on. Jorah and Jon bond over Jeor Mormont, and Jon tries to give Longclaw, the Mormont sword, back to Jorah, but he refuses. Some redshirts flank the crew. In Winterfell, Arya and Sansa talk fondly about their father, until Arya accuses Sansa of betrayal and shows her the note she found. Sansa says she was forced to write it, but Arya doesn’t believe her. She thinks she wants the power of her temporary station, and threatens to share the note with the Lords of the North. Tormund tells the Hound he’s crushing on Brienne. Jon and Beric bond over dying and coming back. They approach a mountain and the Hound says it was the one he saw when he looked in the flames. Tyrion and Daenerys talk about Jon, with Tyrion suggesting Jon is crushing on her. They discuss Cersei and the plan for their meeting. Tyrion recommends caution and reminds Dany that she wanted to break the wheel, not become a part of it. The once again argue over her killing the Tarlys. Tyrion wants to know about a plan for succession, but Daenerys tables any discussion until she’s taken the throne.

Beyond the wall, a reanimated polar bear attacks the squad and it’s the biggest jump scare the show has ever done.  The bear does away with a couple of the red shirts and takes a bite out of Thoros, before the team takes it down. Beric cauterizes Thoros’ wounds with his firesword. Sansa talks with Littlefinger about Arya and the note. Baelish suggests Brienne could help, as she has sworn to protect her. The beyond the wall squad find a small conclave of dead army, a White Walker and a dozen or so Wights. When they manage to kill the White Walker, most of the Wights fall, suggesting that if the one that turned them is killed, all that he sired die too. One of the Wights remains and the team has their prisoner. Mission accomplished. Unfortunately, when they tie him up, the rest of the army comes for them. Jon sends Gendry to run back to Eastwatch to send a raven to Daenerys. He takes off, leaving his hammer with Tormund. Jon and his crew run across a frozen lake to a large rock. When the zombie horde follows, they crash into the water, unable to approach Snow and his men, save for the remaining red shirt lagging behind. The army surrounds team Jon but keeps their distance for fear of falling in the water. Davos makes it back to Eastwatch, collapsing as Davos opens the gate. He asks for a raven. The standoff at the lake continues until morning, or maybe for three mornings, who can tell. Thoros succumbs to his wounds and the others burn his body. Beric thinks that if they kill the Night King, all the army will fall since every turn goes back to him. The Hound reminds Beric that with Thoros’ death, he’s on his last life. 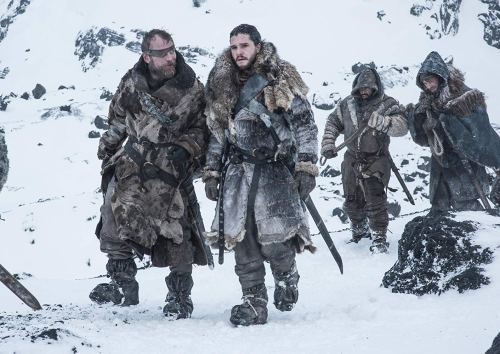 Sansa gets a note summoning the Starks to King’s Landing. She refuses to go to King’s Landing while Cersei is in charge. She sends Brienne in her stead. Brienne worries that Sansa is vulnerable without her. Daenerys receives the receive and plans to ride North. Tyrion tries to talk her out of it to no avail. He’s worried about her safety. She’s too important to risk losing. If she dies, they’re all lost. Dany mounts Drogon and takes off with Rhaegal and Viserion following. The Hound throws rocks at the zombies. The first takes one’s jaw off, but the second skids across the lake. The water has frozen over again. The wights begin their approach and everyone readies for another go. It’s a hundred thousand to six, so not good odds. The good guys get to higher ground, but are losing pretty badly. Luckily, Daenerys and the dragon team arrive just in time. The dragons burn hundreds of wights, and melt the lake so more can’t approach. Daenerys lands nearby and the team save Jon mount up on Drogon, while Jon continues to fight. The Night King grabs a spear, hurls it into the air and lands it right in Viserion. Viserion plummets to the ground, before falling into the lake, dead. The Night King grabs another spear and Jon sends Dany and team away right as he’s dragged under water by more wights. Dany flies away. The White Walkers leave, but then Jon emerges from the water, nearly frozen, and they return for another round. Before they can approach him, Uncle Benjen rides up. He puts Jon on his horse and sends him while he fights off the dead guys. Jon turns around to see Benjen succumbing to the horde. Back at Eastwatch, The Hound loads the dead prisoner into the boat and bids farewell to Tormund and Beric. Dany and Jorah prepare to leave but they see Jon Snow ride up on his horse. As they pack him in on the ship, Daenerys sees all the wounds on Snow’s body from when he died. Sansa sneaks into Arya’s room, looking for the note, but instead she finds Arya’s bag of faces. Arya interrupts her. Arya talks about training to be a faceless man, and how she can assume people’s identities. She threatens Sansa saying that she could assume her face if she so chose. Arya hands Sansa her dagger and leaves. Jon wakes up on the boat back to Dragonstone, with Daenerys at his bedside. He apologizes for the loss of Viserion. Dany says she needed to see it to believe it. She says her dragons were her children, the only kids she’ll ever have. She vows to join him in fighting the army. He tells her he’d bend the knee if he could get out of bed. At the frozen lake, the dead army got some chains at the local chain depot and drag Viserion’s body out of the lake, as the Night King turns his eyes blue and he is reborn.

Comments: This is an amazingly thrilling episode marred some really ridiculous moments. The fight with the army of the dead is unlike any we’ve seen on the show, and even though we only lost Thoros (and Viserion), the importance and consequences were dire indeed. It was so perfectly captured and realized that we didn’t need the deus ex benjen (again) riding in to save the day. If he was around, he could’ve showed earlier. Just like with Bran the season before it just felt too forced for a show that is so intricately detailed. I will say of all the things that have shocked me on the show, I was not prepared for the death of a dragon. I expected the three would be the lynchpin of the series finale, with Jon, Dany and perhaps a third Targaryen (Tyrion was my guess) riding them into final battle. Alas, it was not meant to be. The battle also served to change both Daenerys and Jon’s opinion of the other, with Dany fully agreeing to support him in the coming battle, and Jon agreeing to support her in her bid for the throne. It also became unclear what happened to Rhaegal during the battle. Dany is shown leaving with all three dragons, but it felt like only two were at the battle. Rather than Benjen, Rhaegal could’ve come back for Jon. At the end of the episode, Rhaegal is not at Eastwatch, so it’s just curious why that continuity was so muddled. Also not sure what happened to Gendry’s hammer. That thing was boss and I hope it’s not sinking in the lake. But as fast as Davos traveled in the last episode from Dragonstone to King’s Landing back to Dragonstone to Eastwatch, now we have to buy Gendry going back to Eastwatch on foot, sending a raven to Daenerys and having her receive it and fly Dragon Express up there just in time to save the day. It was all well done, but for a show with flying creatures, resurrections, and walking dead guys, this was really pushing suspension of disbelief.

The biggest issue with the episode, and the season really, is the horseshit scene with Arya and Sansa. They are both smart enough to see through Littlefinger, and (SPOILER ALERT FOR THE SEASON 7 FINALE) we eventually see that they do. At some point they let each other in on what’s been happening and come together. The earlier scene, when Arya makes Sansa aware she has the note, works in service to making Littlefinger believe they are at odds with each other, but the final scene is pure fakery for no one but the audience. I’m not a fan of that mode of storytelling in general. It’s the Ocean’s 11 effect of leaving the audience out of certain scenes so you can shock them later with all the stuff that was going on without their knowledge. It’s cheap, and unworthy of a show that is (again) so intricately detailed. If the end result was what we see in the finale, there were other ways to build to that. There were more subtle ways to allude to Arya and Sansa feeling threatened by each other without overtly having them threaten each other. Even though they’ve always had issues, they are sisters that have spent seven years trying to reunite. That was not going to be undone in a couple days. Besides, they’ve got their super-powered brother in the next room that sees everything so he’s obviously able to cut through a lot of the bullshit. All of it would’ve been fine if Littlefinger was around and we could believe it was being done for his benefit. With hindsight, this scene just doesn’t hold up, because it assumes Arya and Sansa haven’t put their heads together already. Sansa spent most of season six telling anyone who would listen that Littlefinger wasn’t to be trusted. We know she didn’t fall for this, so it was all a big waste of time to watch it play out until the finale, which at least salvages the story. Still, if I ever rank all the GOT episodes (and, of course I will), this one will end up lower because of that one scene.

Quotes:
Tormund (to the Hound): I don’t think you’re mean. You have sad eyes.

Tormund (about Brienne): I want to make babies with her. Think of them-great big monsters. They’d conquer the world.

The Hound: Your lips are moving and you’re complaining about something. That’s whinging. This one’s been killed six times, you don’t hear him bitching about it.

Thoros: I just got bit by a dead bear.

Tyrion: If we want to create a new and better world, I’m not sure deceit and mass murder is the best way to start.

The Hound: Careful, Beric, you lost your priest. This is your last life.
Beric: I’ve been waiting for the end for a long time. Maybe the lord brought me here to find it.
The Hound: Every lord I’ve ever met’s been a cunt. Don’t see why the Lord of Light should be any different.

Title: Duh, where Jon and his team goes for their face-off with the not-exactly dead army.

Deaths: Benjen falls to the Wight army. Thoros of Myr got chomped by dead bear. And Viserion fell from the Night King’s shot (maybe he’s Bronn from the future, who is also a great shot).