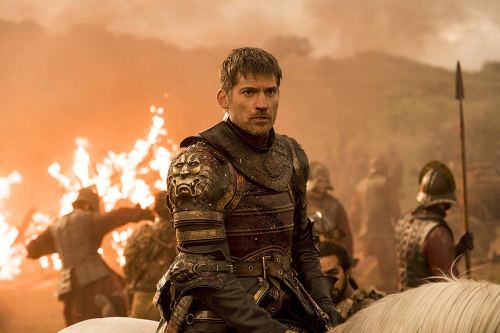 Synopsis: After sacking Highgarden and raiding its coffers, Jaime sends the bounty along to the Iron Bank (per Cersei’s promise in the previous episode). Jaime orders Bronn to gather food from the local farmers as they prepare to head home. Cersei meets with her rep from the Iron Bank. Having paid him back, she wonders if he’s amenable to new deals. Baelish gifts Bran with the dagger that was used to almost kill him. Weird gift, and since we haven’t seen it since Ned had it suggests he took it back from him after he captured him for Joffrey. Bran asks if he knew who it belonged to, but Baelish says he does not and that not knowing that is what started the War of the Five Kings. Bran makes a comment that “chaos is a ladder” referencing a comment that Littlefinger said to Varys many years ago (season 3 to be exact). Meera tells Brandon she’s going back home and he coldly says okay. She is upset by his lack of emotion after all that they’ve been through, and losing Summer, Jojen and Hodor to help him. Bran says that he’s not really Bran anymore and Meera thinks he died back in that cave. She leaves. Arya has another troublesome encounter trying to get through the gate at Winterfell. The guards don’t believe who she is, but she manages to sneak in regardless. The guards tell Sansa who says she knows where to find her sister. In the crypt, Arya and Sansa reunite for the first time since season 1 (episode six to be exact). The sisters are cordial, talking about their father, Jon, and their time apart. Arya mentions her kill list, which Sansa scoffs at. They embrace, but realize they have both changed a lot since they last saw each other. Sansa takes Arya to Bran at the Godswood. Bran mentions Arya’s list, he’s like a rolling TBT machine. Oh yeah, he has a wheelchair now. Bran gifts Arya with the Valyrian steel dagger. The Starks return to the castle as Podrick and Brienne look on. Podrick tells her she should be proud, her vow to Catelyn has been fulfilled, even though she didn’t have much to do with it.

At Dragonstone, Missandei tells Dany about hooking up with Grey Worm. Jon interrupts to show them what he found in the caves as he prepared to mine the dragonglass. He shows her ancient drawings from the Children of the Forest, that show the First Men and the spiral pattern we’ve seen before. They also show them against a common enemy – the White Walkers. Jon stresses his point of teaming up, and Daenerys reinforces her stance that she will support him when he bends the knee. He doesn’t think the Northerners will support a Southern leader after what they’ve gone through. Tryion interrupts to tell them about taking Casterly Rock and the loss of Highgarden. Dany is pissed at losing her armies and says she’s going to take her dragons and fly to the Red Keep. Tyrion advises against it. Dany asks Jon’s advice. He says that she made impossible things happen and inspires people because she’s been different than other rulers but if she uses her dragons to destroy cities, she’s no better than Cersei. Podrick practices with Brienne. Arya joins them. She wants to train with Brienne. As they spar, Sansa and Littlefinger look on. Sansa notes how different Arya has become. Davos walks with Jon talking about Daenerys. They are joined by Missandei and she talks of her faith in Dany and how she came to be her supporter and advisor. 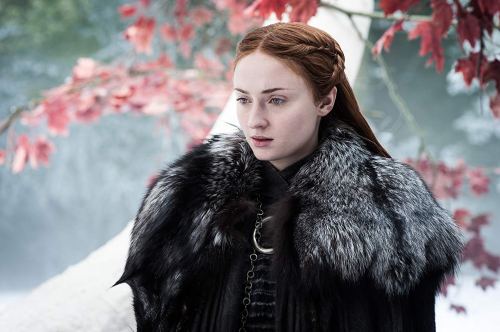 Theon arrives at Dragonstone with what’s left of their fleet. Jon and Greyjoy have an uncomfortable reunion where Jon tells him the only thing keeping him from killing Theon is that he helped Sansa. Theon wants to ask Dany for help in getting Yara back, but Jon says she’s already left. In the field, Randyll Tarly updates Jaime and Bronn, that the gold has been returned. As they talk with Dickon, Bronn hears a rumbling and they grab their shields as a Dothraki horde appears over the hill. The Lannister army prepares for battle, as Bronn tells Jaime to get back to King’s Landing, but Jaime isn’t abandoning his men. Then, Daenerys appears atop Drogon and turns the front line to ashes. The Dothraki lay waste to the another round of men as Drogon continues to burn their carriages. The Lannisters fire arrows at the dragon but they bounce off. Bronn fights his way through flames and Dothraki blades to man Qyburn’s dragon assault weapon. Tyrion watches the siege from atop a nearby hill and sets eyes on his brother for the first time since he set him free in season four. Jaime dodges another drive-by from Dany, and Bronn fires a giant arrow but misses. He reloads, aims, and nails Drogon in the side as he plummets towards the ground. He destroys the weapon while Dany dismounts and pulls the spear from his side. Tyrion watches as Jaime darts towards a seemingly defenseless Daenerys, but the dragon turns and fires right before Bronn grabs Jaime and they both go flying into the river. 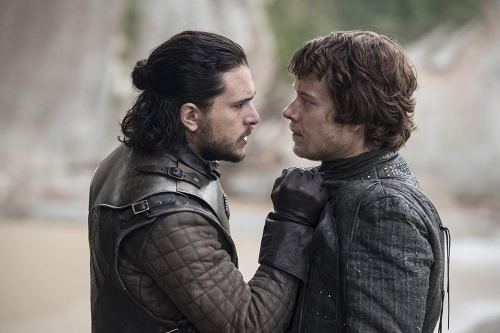 Comments: Some of the big battles, the show builds to, prepares us for the moment. Blackwater, the Battle of the Bastards and Mance’s attack on Castle Black were all foreshadowed strongly, but Daenerys’ first assault on the Lannisters came a bit abruptly, which made it all the more intriguing. While the cliffhanger ending was a bit forced, no way Jaime goes out like that. The biggest moment of the episode was the full Stark reunion, with all the remaining full-blooded Starks since the first episode. It wasn’t perfect, the kids have all changed so much, Bran isn’t really Bran any more, and Arya and Sansa have been through their own ordeals, that it wasn’t a complete lovefest. But it was the reunion that made sense for the characters. While this episode continues the fast pace of the seventh season, it manages to get in quite a few slow and important moments before the final battle. In addition to the Stark reunion, we also say goodbye to Meera, who has a terse goodbye with Bran. I wouldn’t mind seeing her back in season 8. 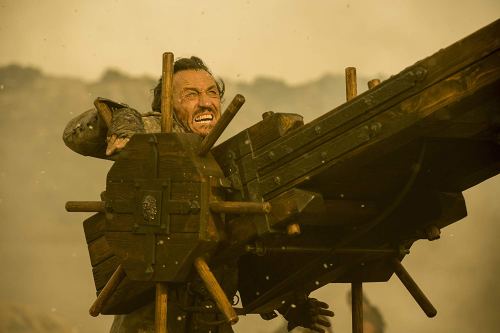 Quotes:
Bran (to Littlefinger): Chaos is a ladder.

Sansa: You shouldn’t have run from the guards.
Arya: I didn’t run. You need better guards.

Brienne: Who taught you how to do that?
Arya: No one.

Meera (to Bran): You died in that cave.

Davos (to Jon): Will you forgive me if I switch sides?

Title: Referring to the gold that the Lannisters retrieved from Highgarden after defeating the Tyrells.

Deaths: No one specific, but a whole army of Lannisters are burned and bludgeoned, by Drogon and the Dothraki respectively. Thy manage to kill a bunch of Dothraki as well, with Bronn getting one with the dragon-killing machine.