Synopsis: Another surprise scene before the opening credits, the first since last season’s “The Broken Man,” and this one also featuring the return of character. This time it’s Walder Frey. But didn’t he die, you say? Wait for it. Walder gathers all the men in his family and serves them wine, offering them a toast. As the men all drink, he celebrates them for their behavior at the Red Wedding, and the slowly chastises them. The men start to choke and cough up blood. As they fall to their deaths, Frey pulls his face off. It’s Arya. In one fell swoop she has ended the Frey line. She tells Frey’s young wife that to tell people that the North remembers. Turns out the winter that is coming is helped by the cold front following the Night King and his army. We haven’t seen the crew in a few episodes, but they’ve picked up some new recruits, notably a couple giants. Bran and Meera arrive at the wall where they meet with Eddison Tollett. Meera introduces them, and Bran creeps them out by telling Edd about his past. Jon talks with the Northerners about prepping for the war to come. He sends Tormund to Eastwatch-by-the-Sea, as it will be the first stop if the undead army gets past the wall. As they discuss what to do with the Umbers and Karstarks, Jon says he will not punish children for the acts of their fathers. Sansa is openly defiant and Jon shuts her down. After, Jon chastises Sansa for undermining him and she compares him to Joffrey before quickly taking it back. She concedes that he’s doing okay at the leading thing. Sansa pushes Jon to be smarter than Ned and Robb. They both made bad decisions and got killed for it. Jon is summoned to King’s Landing to bend the knee for Cersei. Sansa reminds Jon that she knows Cersei, and that she’s killed every enemy she’s ever had. Reluctantly, she admits she learned a great deal from the new Queen.

Cersei and Jaime have a terse confrontation. Cersei asks if he’s angry with her or afraid of her. Cersei says Dany and Tyrion are coming to take back the throne, and she throws back how he freed him and now he fights with their enemies. Jaime says Dany will land at Dragonstone. Cersei notes that they are surrounded on all sides by enemies. Jaime wants to talk about Tommen, but Cersei said he betrayed them. Jaime cautions Cersei that they need allies. She’s thought of that as well. Enter Euron, whose fleet sails to King’s Landing. Jaime questions the alliance, and Cersei adds that he’s looking for a marriage as well. In the throne room, Euron pleads his case. Jaime is challenging. Euron offers 1000 ships in exchange for marriage. Cersei declines. She doesn’t trust him and he vows to return with a gift, a priceless one. At the library in Oldtown, Sam continues his maester learnings, which involve bedpan duty for some reason. He sees a locked off section in the library and he asks Archmaester Marwyn if he could have access to it, because of what he’s seen in north of the wall. Marwyn says the wall has always stood against the evils against it. Not quite the answer Sam wanted, or any answer really. So, Sam steals the keys and enters the area on his own, pilfering a few texts. Brienne has returned to Winterfell where she resumes training with Podrick. Tormund approaches her. Baelish sidles up to Sansa. She is no longer entertaining his flirtations. Arya approaches a group of soldiers who offer her some food. She accepts their offer. They ask her where she’s headed, and she says King’s Landing. She’s on her way to kill the Queen. The men laugh.

The Hound travels with the Brotherhood without Banners, freezing in the snowy winter. They find an old house to camp out in. Turns out, it’s the house the Hound and Arya once stopped by and robbed a man and his daughter. As the Hound predicted, the man and his daughter are dead, bones rotting in the corner. The Hound questions Beric why he’s the one that keeps getting brought back, but he admits that he has no clue. Thoros has built a fire and he asks Clegane to look into it, to tell him what he sees. As he studies the fire, the Hound says he sees a wall of ice, where the castle meets the sea, and the dead are marching past. When Thoros wakes in the morning, he sees that Clegane has buried the dead, and surmises that he knew them. Sam flips through a book and makes a discovery, a mountain of dragon glass buried underneath Dragonstone. The next day as Sam continues to clean up, he is startled by a patient, someone with greyscale asking about Dany, so obviously Jorah. Dany and her squad arrive at Dragonstone and she takes her first steps on her old family home. She enters the now-empty castle and assumes her rightful place.

Comments: It’s a softer kickoff to the season. New alliances are formed as Euron tries to get in with the Lannisters. Dany arrives home, so close to her planned destination of King’s Landing. Her conquest feels all the more closer, especially since we know there are only 13 episodes left in the series. The episode is fine, we get quick check-ins of The Hound, the army of the dead, and Arya as well brought up to speed on the family squabbles in Winterfell and King’s Landing. It’s just all perfectly okay as far as Game of Thrones goes. Granted, anything after the last two episodes would feel like a letdown. There are two moments in the episode that also weaken it. One is the appearance of Ed Sheeran as one of the soldiers Arya meets, the other being the Hound’s comment about Thoros’ “top knot” aka man bun. Both are quick and easy jabs that immediately launched me out of the context of the show. Other musical artists have been woven into the fabric of the show, but they all felt like part of the scenery. Sheeran, with his cherubic Irish look, and even having him sing, all shine a big spotlight on his superstar status. It just feels like a cheap stunt for a show that is better than that. There was nothing wrong with Ed’s performance, but for a scene that is mostly unnecessary, it only highlights how meaningless it is by using it as a vehicle to give screen time to someone undeserving of it. The top knot crack while funny and well-deserved, felt like a cheap shot that was meant to throw shade at the world we live in while viewing it, and not the world of the show itself. Still, as Dany and her squad get new threads, and the incestuous twins’ love begins to fray, there’s still enough of interest in the episode to keep it from being a bore. 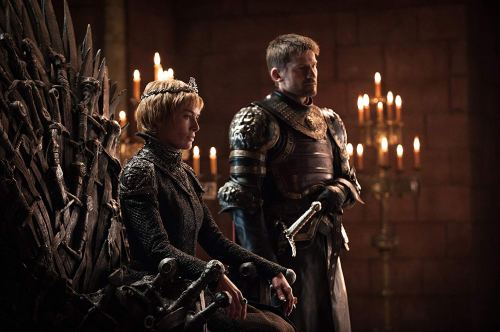 Quotes:
Arya: When people ask you what happened here tell them the North remembers. Tell them winter came for House Frey.

Jon: What did father use to say? Everything before the word “but” is horseshit.

Cersei: You think I listened to father for forty years and learned nothing?

Sansa: No need to seize the last word, Lord Baelish. I’ll assume it was something clever.

Euron: So here I am, with a thousand ships, and two good hands. (throwing shade at Jaime)

Dany: Shall we begin?

Title: The ancestral seat of the House Targaryen, that sits on the opposite end of Blackwater Bay from King’s Landing. It was last seen as Stannis’ base of operations. It is first mentioned by Jaime as to he (correctly) assumes Dany will port first. Later, Sam mentions it because of the mountain of dragon glass hidden beneath it.

Foreshadowing: Dropping this now, since I’m sure there’s foreshadowing laid in there, but since it will likely pay off in the season yet to air, I’m not going to have much to say. That said, the Hound’s vision seemed pretty prescient.

Deaths: Harald Karstark is confirmed to have died off screen in the Battle of the Bastards. Arya destroys the Frey line by poisoning all of the men in the family.