Game of Thrones – Episode 6.9 “The Battle of the Bastards”

Synopsis: Meereen is under siege. Dany has returned to see her city pelted with fireballs. Tyrion is apologetic and Dany doubts that Meereen has been thriving in her absence. Dany is ready to get to work and Tyrion asks if she has a plan. Her plan is to kill the masters and burn their cities down. Tyrion cautions her not to follow in the footsteps of her father. Tyrion has an alternate approach. They meet with the heads of the slave cities to discuss terms of surrender. As the slavers make their demands, Dany says they are there to discuss their surrender not hers. They tell her her reign is over, but she shoots back that it has only just begun. Just then Drogon arrives and she mounts him, riding him into Slaver’s Bay to destroy the ships. Then, Dany’s other dragons bust through their walls to join the fray. As the Sons of the Harpy fight on the land, the Dothraki horde arrives to destroy them. After the fighting, Grey Worm tells the remaining slaves they are free. Of the three masters that remain, Tyrion says one of them must die for breaking their pact, as two of them throw the third under the bus, it is the third whose life is spared. Tell your people you live by the grace of Queen Daenerys, Tyrion says. And tell them what happened should the idea of an uprising come back around.

On the field outside Winterfell, Jon and Sansa await the arrival of Ramsay to discuss their battle. Jon tells Sansa she doesn’t have to be there, but she says that she does. Ramsay arrives with a smile for his wife and tells Jon if he surrenders now he will pardon everyone. Jon offers to fight him one on one, but Ramsay declines. He knows his army will defeat Snow’s. Ramsay asks if he’s willing to bargain with Rickon’s life, and Sansa asks for proof they have him. His men toss Shaggydog’s head. Ramsay starts to follow up but Sansa dismisses. You’re going to die tomorrow, she says, and rides off. Ramsay says his dogs are dying to meet them, he hasn’t fed them in seven days. They leave. Back in camp, Jon, Davos and Tormund are discuss strategy. After, Sansa follows up and reminds Jon that he doesn’t know Ramsay. They argue over the plans. Sansa is pissed that he’s been dismissive of her when she’s the only one that knows how Ramsay thinks. She tells him they should’ve waited until they had more men. Jon says he’s doing everything to make sure they get Rickon back, but Sansa says he’s already dead. Davos and Tormund compare notes, and Davos has to explain metaphors to Tormund. They talk of their beliefs in the wrong men, Tormund with Mance, and Davos with Stannis. Davos walks on saying he can never sleep the night before a battle. Jon visits Melisandre and asks her for advice. Don’t lose, is all she can say. Jon says if he falls, to not bring him back. As Davos wanders out on his walk, he finds the remnants of a fire pit, and the toy he made for Shireen in the rubble. Back in Meereen, Yara and Theon have arrived and are in Dany’s throne room. Tyrion chastises Theon for how poorly he treated him. Theon makes apologies and says he’s changed. They discuss Euron’s uprising and vow to support Dany. Dany accepts their offer, but they have to agree to put aside their way of life of reaving, raping and the like. Yara and Dany shake on it.

On the battlefield, Jon rides out in front of his men. Across the field, Ramsay’s army rests behind flayed men being burned. Ramsay arrives to the front of his pack, dragging Rickon. He tells the young Stark that he needs to run to his brother and if he makes it he lives. Rickon darts off, but for some reason maintains a straight line. Jon mounts his horse and charges forward as Ramsay begins to sling arrows towards the boy. Just as Jon nears him, an arrow pierces his heart and falls to his death. The battle has begun. Jon is knocked off his horse as Ramsay’s army charges towards him, and he pulls his sword, just as his army arrives behind him. Horses tumble. Arrows fly. Swords are drawn. Bodies fly. Jon slices his way through Ramsay’s men and bodies begin to pile up on both sides. Davos brings in the second wave, which thankfully includes the giant, Wun Wun, who is a one man wrecking crew. Unfortunately, before they realize it, Jon’s army has been surrounded by Ramsay’s. As they narrow in on all sides, Jon is knocked down and nearly trampled to death. But he didn’t come back to die like that and he rises back up as Ramsay’s army has them on the ropes. Then, a horn sounds. Tormund bites of Karstark’s ear, finishing him, just as Ramsay’s men are surrounded by the Knights of the Vale, with Sansa and Littlefinger looking on. Looks like that was the raven she sent. Tables successfully turned, Ramsay retreats to Winterfell and tells his men they can easily withstand a siege, but they weren’t counting on a giant. Wun Wun busts the doors down before succumbing to the dozens of arrows. The last of the giants is no more. Jon faces down Ramsay, and charges at him with nothing but a shield and his fists, finally giving Bolton the pummeling he’s been deserving since he first appeared. Sansa arrives and Jon can’t bring himself to finish the job. The Bolton banners are dropped. Stark banners grace Winterfell once more. Melisandre smiles, this fits her vision. Davos glares at the Red Woman, clutching Shireen’s deer. Later, Jon surveys the damage as Sansa demands to know where Ramsay is. She finds him locked up. Ramsay tries to taunt her, but Sansa isn’t having it. He’s going to die. His house is going to die. And history is going to forget him. Ramsay doesn’t think she has the stomach to hurt him, and he might be right, but she goes one better. She has set his dogs free into his cell. He hasn’t fed them for seven days she reminds him, and he looks like a nummy treat. As the dogs go HAM on Ram, Sansa watches before walking away victorious.

Comments: Despite the title, and general focus, this is a crowning achievement for Sansa (and Sophie Turner). She’s been slowly challenging her circumstances but after Jon Snow has been dismissive and underrecognized her value, she finally stood her ground. She is the only one who truly knows Ramsay, and really she is the one who outsmarts him. She saves the day with her calling for the Knights of the Vale, and she is the one that ends the Bolton line by unleashing Ramsay’s starving hounds on him. For Turner, every moment on screen she’s on fire. Her dismissive coldness to Ramsay as they meet before the battle is the first cheer moment. Then she puts her brother in his place. She is the one that understands they’ve already lost Rickon, and it’s Snow’s belief he can save him that starts the battle off exactly where they didn’t too. Her final moments with Ramsay, where she gives him a steely outlook on his prognosis (“your house will disappear…”) is another YES! shout. Then, the sheer perfection when she turns the tables on Ramsay, by unleashing his own dogs on him, countering the sadistic monster with a move worthy of him, and as Ramsay becomes Alpo, she slightly turns away, then forces herself to watch for a moment, then walks away with the warm blanket of vindication. It’s a shame Turner didn’t at least get an Emmy nomination. The rest of the episode, first with the culmination of Slaver’s Bay, and then the end Ramsay’s reign, payoff two years long stories, and help set the table for the season finale. From a sheer technical standpoint, this is one of the most amazing episodes in TV history, worth every penny of the tens of millions it cost. Visually, so many shots are stunners, but two that stand out are Jon, after falling off his horse, pulling out his sword as Ramsay’s army barrels towards him; and one with Davos, after discovering the figure he made Shireen, his dark cloak wafting in the breeze as the morning sun begins to peek over the horizon. And while all of these things make for epic television, nothing matches the complete moment of catharsis when Jon Snow finally gets to beat the shit out of Ramsay. That was a well-earned series of punches that were a long time coming. Yet again, the penultimate episode of the season feels like the standout, but for the first time in the show’s history, the season finale manages to one-up the episode prior. But more on that next time.

Tyrion: Thank you for the armada. Our queen does love ships.

Razdahl: Your reign is over.
Dany: My reign has just begun.

Dany: Lord Tyrion tells me your father was a terrible king.
Yara: You and I have that in common. 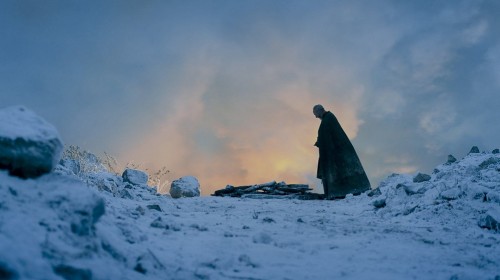 Foreshadowing: Tyrion once again brings up the wildfire in his conversation with Dany, really spelling out its importance.