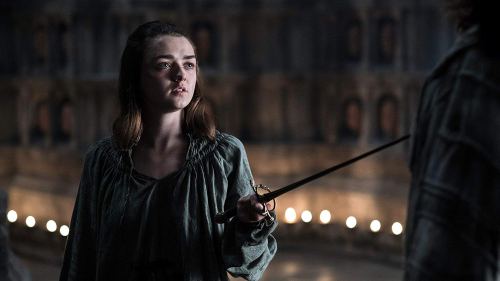 Synopsis: Lady Crane performs in the play recounting Joffrey’s death and this time she’s an angry Cersei, per Arya’s prior direction. Backstage, she is stunned to find a wounded Arya. Lady Crane stitches Arya up back at her place. Arya asks about the actress that wanted Lady Crane dead. She says she took care of her. She invites Arya to join the troupe, but Arya says she has other plans. Some of the men that slaughtered Brother Ray’s group are sitting in the woods having a chat when they are disrupted by the Hound and his axe. Heads roll, entrails unleashed, and Clegane asks the last one where their leader is as he’s bleeding out. Tyrion and Varys walk the streets of Meereen and catch one of the women who serves the priestess spreading the heroism of Daenerys. Tyrion’s plan was successful. As they approach the gate, Varys takes his leave. He is needed elsewhere. Qyburn tells Cersei that members of the Faith Militant have been invited into the Red Keep wishing to speak with her. She sees the men with the Mountain. She has been summoned by the High Sparrow, but Cersei refuses to leave. Lancel cautions her that if she doesn’t come with them there will be violence. She agrees to that and they all watch as the Mountain rips the head off one of the Faith. Cersei tells the others the High Sparrow is welcome to visit her in the castle. Brienne and Podrick arrive in Riverrun and see that the Lannister army have camped outside. Bronn and Podrick get reacquainted and Bronn helps with Pod’s training. Jaime and Brienne catch up and Brienne updates Jaime on Sansa’s plan to take back Winterfell. As they discuss each other’s allegiances they realize they are on opposite sides. Jaime lets Brienne offer Brynden safe passage out of Riverrun to support Sansa in exchange for surrendering Riverrun to the Lannisters and he agrees. She tries to return his sword to him but he refuses. It’s hers. Brienne fails to convince the Blackfish to surrender. Brienne tells Pod to get a raven to send back to Sansa. Tell her I failed, she says.

Cersei arrives in the throne room where there’s to be a royal announcement. Kevan prevents her from standing beside Tommen. The King reinforces the alliance between the Faith and the crown. He sets a date for Cersei and Loras’ trials and adds that trial by combat is now outlawed, thus Cersei’s plan to have the Mountain fight for her is useless. Qyburn tells Cersei he’s been investigating a rumor she mentioned and promises her it’s more than she expected. Tyrion is happy and gets Missandei and Grey Worm to toast with him. Tyrion hopes that when the fighting is all over he can have his own vineyard. The three laugh and joke (for real, Grey Worm cracks a smile) until they are interrupted by the bell. They dart out to the balcony to see a horde of ships arriving. The masters have come back for their property, Missandei says. Jaime visits Edmure, to find a way out of this situation. He tells Edmure that while he’s been in prison his wife had a son. Edmure reminds Jaime that he’s the bad guy. Jaime talks fondly of Catelyn and likens her fierceness to Cersei’s, and says he will do anything to get back to her, up to and including murdering his son and every last Tully. Later, Edmure approaches the castle and demands entry. The Blackfish does not want his men to listen to Edmure, but he is outnumbered. The drawbridge is lowered. Edmure enters and once on the other side, and with Jaime and the Lannister army watching, he takes control of the castle and then orders his men to surrender. The Blackfish sneaks Podrick and Brienne out of the castle but he vows to go down fighting. And he does, as one of his soldiers informs Jaime. As the sun rises, Jaime sees Brienne and Podrick rowing away and he waves goodbye. 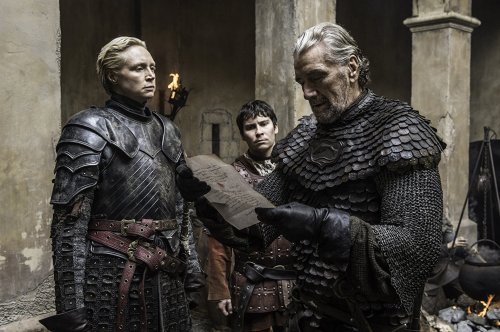 Meereen is under attack. Fireballs pelt the castle. Tyrion argues with Grey Worm on a defensive strategy. They here a noise from above and everyone arms themselves. Daenerys arrives from the roof. Mama’s home. The Hound happens across Thoros of Myr and Beric Dondarion. They have captured the remainder of the men who killed Brother Ray’s group and are about to hang them. They bargain for who gets to kill which ones, and all the men are hanged. The Hound teams up with the brotherhood. Arya wakes up to find Lady Crane murdered. The Waif (ugh, the Waif) stands over her, blaming Arya for her suffering, and talking of the life the many-faced god was promised. The Waif (ugh, the Waif) chases Arya through the streets and tracks her back to her room. Arya is waiting, bleeding, but she stands to fight, but first knocking out the light. Later, Jaqen sees a trail of blood in the House of Black of White and finds Arya. She has added the Waif’s (ugh, the Waif’s) face to the Hall of Faces. Finally, a girl is no one, Jaqen says. A girl is Arya Stark she shoots back. And she’s headed home. Jaqen smiles, letting her leave. 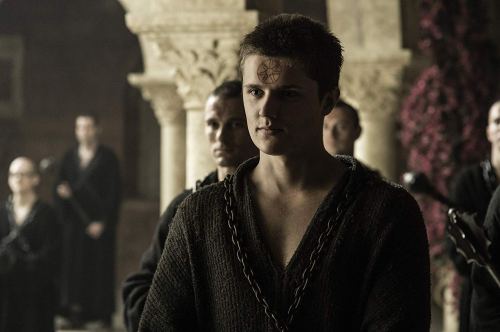 Comments: Finally, our long national nightmare with the Waif (ugh, the Waif) is over. It’s not the actress’ fault, it’s just a character that represents one of the weaker and, sadly, pointless stories in the show. I’m happy with the result, Arya is a certified badass with Mystique level superpowers, but how she got there and why she was let go doesn’t make sense in the scheme of things. But we mustn’t dwell. It’s over. Also over, is the siege at Riverrun, one of the first big battles that wasn’t. Jaime and Brienne had what passes for flirtation for them, and the Blackfish dies offscreen, but if it saved the budget for the next episode, then it’s all well and good. Tommen’s decision (but really it’s the High Sparrow) to abolish trial by combat will have deadly consequences for a number of people. Meereen is back under fire, but Dany just arrived on Drogon’s back so he should put an end to that right quick, plus she has a horde of Dothraki coming up behind her and some Ironborne folk on their way as well. Really, the show is dwindling down its set pieces with three major areas remaining in focus-King’s Landing, the North, and Meereen.

Quotes:
The Hound: You’re shit at dying, you know that?

Lancel: Order your man to step aside or there will be violence.
Cersei: I choose violence.

Missandei: I have tried wine before. It made me feel funny.
Tyrion: That’s how you know it’s working.

The Blackfish: I haven’t had a proper sword fight in years. I expect I’ll make a damn fool of myself.

Jaqen: Finally, a girl is no one.
Arya: A girl is Arya Stark of Winterfell. And I’m going home. 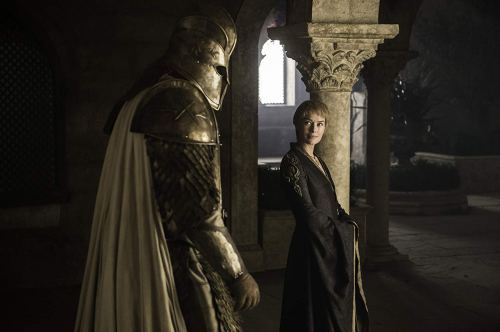 Foreshadowing: Arya wondering what’s west of Westeros might be a mission statement for post-series. Qyburn’s rumor for Cersei will play out sooner than that. Tyrion also makes mention of future plans (wanting to open a vineyard).

Title: A girl is no one, says Jaqen indicating Arya has paid her membership dues to the faceless men, but somehow she gets away with being someone and still keeping her superpowers.

Deaths: The Hound slices and dices through the Red Guard. The remaining members are hanged by him and the Brotherhood without Banners. Ding dong the wicked Waif (ugh, the Waif) of the Westeros (but really Braavos, I know) is faceless thanks to Arya and needle. Lady Crane is taken out. And Brynden the Blackfish Tully dies off-screen.