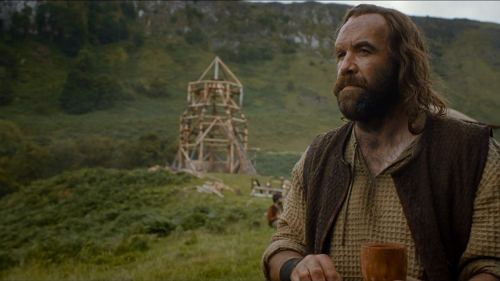 Synopsis: What’s this now? A scene before the opening credits? The first time since the season 4 premiere, and the first time it hasn’t been a premiere. We see a bunch of men pulling a Habitat for Humanity as they build a house, under the tutelage of Brother Ray (guest star Ian McShane). One of the men is revealed to be none other than the Hound, who is apparently not quite dead. Brother Ray comments that he’s never seen anyone swing an ax like the Hound. When the crew breaks for lunch, The Hound eats by himself. Brother Ray says the other men are afraid of him, but Sandor is used to that. It was Ray that found the Hound near death and brought him back. He asks what kept him alive and the Hound says “hate.” Brother Ray says the gods have plans for him. The High Sparrow visits Margaery as she’s reading one of the holy books. They discuss the religious texts and then the Sparrow asks why Margaery hasn’t resumed trying to make a baby with her husband. She doesn’t have the interest, she admits, but he assures her that she must provide Tommen with an heir to keep all the good work that they’ve done. Then, the Sparrow manages a veiled threat against Olenna. Margaery is allowed to see Olenna under supervision, which grandma is none too excited about. Magaery maintains all of her support for the faith, and tells Olenna she needs to go home, while slipping her grandmother a small paper with the Tyrell rose on it. Margaery letting Olenna know she’s still on their side. In the field, Jon Snow, Davos and Sansa meet with the Wildlings who don’t want to give their support to Jon. His fight is not their fight. Jon agrees, but if they don’t help him now they will be fighting the Boltons once he destroys Jon. Tormund convinces his people to support Jon, but the giant’s support helped too.

Cersei visits Olenna, and Olenna isn’t shy about blaming Cersei for all of it. Cersei agrees that it’s her fault and asks Olenna for help. Olenna plans on leaving and tells Cersei she should do the same, she’s already lost, she says. Jaime and Bronn arrive in Riverrun with hundreds of soldiers in support of Frey’s men. The Frey sons announce they have Edmure and that they will hang him if the Blackfish doesn’t yield. Brynden doesn’t bite. They threaten to cut his throat, and the Blackfish urges them to do it. Edmure is none too excited. Jaime takes control of the situation and assumes command from the Frey sons. Jaime decides to take a more subtle approach. Jon and Sansa visit Bear Island and its leader, the young Lady Lyanna Mormont. The young Mormont’s mother was a background player in season 1 who fought for Robb Stark. Lyanna’s uncle was Jeor, making Jorah her cousin, and we now have four Mormonts to appear in the show never sharing a scene. Lyanna is a spitfire and instantly endears herself to the audience though not as instantly to Jon and Sansa. They ask for her support and her troops in the war. Lyanna is hesitant but Davos convinces her. The Kingslayer meets with the Blackfish to urge him to surrender. Brynden gives him a hearty fuck off and sends him on his way. Jon isn’t so lucky getting support from House Glover. Sansa speaks out to no avail. 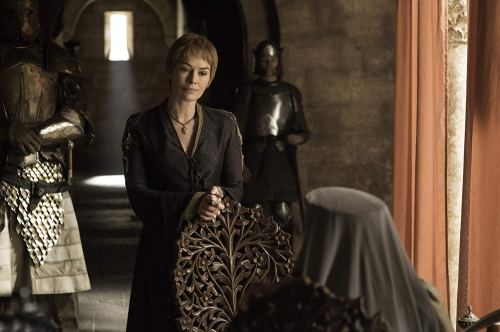 The Ironborne men and women dock near a brothel. Yara gets smoochy with a local prostitute, but Theon is uncomfortable with all the naked ladies he can no longer bang. Yara tells Theon she will never laugh at him. She supports him and wants to make sure he’s in her corner as they sail to Meereen to meet with the dragon queen. Sansa challenges Jon’s leadership and is worried that they are going into battle without the numbers. Jon dismisses her. She pens a letter and sends it off. Brother Ray gives a sermon to his men, preaching of his dark past and his shame. He charges his followers to bring a little goodness to the world. He pointedly looks at Clegane. The group notices some men approaching and Brother Ray speaks to them. They are protectors, they say but they have a menacing vibe. They go on their way and the Hound urges Brother Ray to be wary, and to be prepared for a fight. Arya meets a Westerosi in Braavos and books passage home in the morning. As she walks across a bridge, she is approached by an old woman who calls out to her and promptly stabs her in the belly. It’s the Waif (ugh, the Waif). She stabs Arya several times, but she pushes her away and dives in the water. She makes it back to land and stumbles through the town looking for help. The Hound is away from the others chopping wood when he notices how quiet it’s gotten. He returns to his group and sees the entire squad has been butchered and Brother Ray hangs from the house they were building. Clegane grabs his axe. 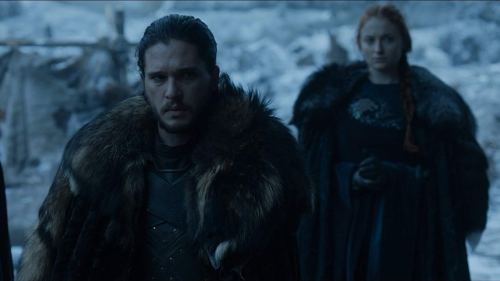 Comments: While his return is certainly welcome, the Hound coming back into the fold was quite surprising. He wasn’t a character that felt like he had unfinished business. Though we didn’t see him die on screen he was certainly dying when we left him, and this is obviously a show where the dead don’t always stay dead (hi, Jon!). What’s most interesting will be seeing which story or character he crashes into next. Honestly, I’ve forgotten. Sansa continues her growth, and for some reason the great leader that is Jon Snow continues to step in it. Maybe it’s a byproduct of all that dying. Lyanna Mormont is a great addition and if Bran can lead the Stark house, it’s acceptable for her to run hers. She’s a beast and a great mix of brains and brawn. The situation at Riverrun seems to be escalating and the verbal faceoff between Jaime and Brynden was a solid match. The overriding story of the season has been the rise of the Faith Militant and how that has been keeping King’s Landing busy while the North deals with their issues. Margaery continues her longstanding way of assimilating perfectly into any given situation, but her loyalties remain where we knew they did. Is this the final showdown between Olenna and Cersei? If it is, it was certainly a strong note to go out on.

Quotes:
Jaime: You have better instincts than anyone else in the Lannister army.
Bronn: That’s like saying I have a bigger cock than anyone in the Unsullied army.

Brynden: I wanted to see you in person, get the measure of you.
Jaime: Well, now you have.
Brynden: Aye, now I have. I’m disappointed.

Yara: Now, since it’s my last night ashore for a long while, I’m gonna go fuck the tits off this one.

Davos: The real war isn’t between a few squabbling houses. It’s between the living and the dead. And make no mistake, my lady, the dead are coming.

Olenna (to Cersei): Our two ancient houses face collapse because of you and your stupidity.

Olenna: I wonder if you’re the worst person I’ve ever met.  At a certain age it’s hard to recall but the truly vile do stand out through the years.

Olenna: You’ve lost, Cersei. It’s the only joy I can find in all this misery. 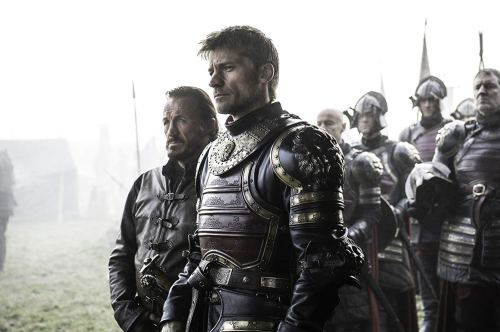 Foreshadowing: Davos’ comment about the real war being between the dead and the living could be used as the promo for season 8.

Title: In reference to Brother Ray, as he speaks about his past, but also a nod to The Hound, who was broken by Brienne.

Deaths: Brother Ray and his followers were slaughtered by the Red Guard.