Synopsis: Davos is stunned when he sees Jon Snow rise from his table. He is confused and struggles to breathe. He stumbles off the table and Davos helps him. Melisandre arrives as Davos asks what Snow remembers. Jon says he remembers being stabbed. Melisandre asks what he saw after and he says nothing, nothing at all. Melisandre thinks Jon is the prince that was promised and the lord of light must’ve brought him back for a reason. Davos convinces Jon to return to his men. He does, hugging Tormund and Tollett, but admitting he’s not sure what he is. Sam and Gilly travel across the sea, which is making Sam sick. Gilly is excited to see Oldtown, but Sam tells her that she won’t be allowed in the Citadel. Sam confesses that they are going to his parents’ house first so that she and baby Sam will have a place to stay and his mom can help care for them. Bran and the Three-Eyed Raven are back in the past watching Ned and Howland Reed, Meera and Jojen’s father, face off against a couple knights. Ned demands to see his sister, but the knights refuse and everyone starts slinging blades. Ned and Ser Arthur Dayne, one of the knights, are the only two left, and Dayne has Ned on the ropes, but Howland stabs Dayne in the back, leaving Ned to finish him. Bran says this isn’t how he was told this story. Ned hears a scream and heads towards a tower, and Bran calls after him, and Ned appears to have heard him. The Raven pulls Bran back to reality. Bran wants to return to the vision, but the Raven says he has to learn everything, in order to become the next Three-Eyed Raven.

Dany and the Dothraki arrive in their town. Dany is brought to a hut with the Dothraki widows where she is stripped and dressed in their brown garb as the elder widow tells her the rules of her new life. As the widow of a Khal, she must remain with the other widows. In Meereen, the whore that was working with the Sons of the Harpy is brought before Varys. Varys tells the woman, Vala, that he knows what she’s done. Varys tells Vala he is aware of her son, and offers her escape with him, in order for information. Tyrion waits with Missandei and Grey Worm, and he tries to instigate a conversation with them. It’s all very awkward and hilarious. Varys joins them and tells the others what he’s learned, that Yunkai, Astapor and Volantis are funding the Sons of the Harpy. Tyrion asks to get the leaders a message. In Qyburn’s lab, he has taken over management of the little birds, the street urchins that used to work for Varys. Cersei, Jaime and the Mountain arrive and Cersei orders Qyburn to send his children out to discover who is plotting against the throne. She tells them that she is planning to request a trial by combat and that she will have the Mountain fight for her. Jaime, Cersei and their giant bodyguard join Mace, Pycelle, Olenna, and Kevan at the small council meeting. Cersei asks why Olenna is there and she says they are discussing Margaery. Kevan tells Cersei she has no standing there, but Jaime reminds him that he can sit on the council. Cersei tells them they cannot make them leave, but Kevan says they cannot make the others stay and he and the others take their leave.

King Tommen butts heads with the High Sparrow and demands that he let Cersei see Myrcella’s final resting place. The Sparrow says she won’t be allowed to visit until after her trial. The Sparrow tells Tommen that Cersei has trouble with the truth but her love for Tommen has always been sincere. He tells Tommen that he should look closer to the faith, and offers to help Tommen. Back in the House of Black and White, blind Arya faces a series of challenges with the Waif (ugh, the Waif). When she finally bests the Waif (ugh, the Waif), Jaqen arrives and gives Arya her eyesight back. A Stark loyalist, Smalljon Umber, meets with Ramsay. He tells Bolton of the Wildlings threat. Ramsay wants him to pledge loyalty, but Smalljon refuses, but does admit that he has a gift for Ramsay. He brings him Osha, Rickon and for proof of identity, the head of Shaggydog. Back at Castle Black, Jon lines up the men who killed him and asks them if they have any last words. Thorne still believes he made the right choice. Olly has nothing to say. Jon has them all hanged. And now they’re watch is ended. He hands his cloak over to Tollett, giving him Castle Black. His watch is ended now too.

Comments: A lot of jumping around, but a lot of movement in every story. Arya’s waste of time with Jaqen comes to a conclusion as she’s back with her vision and accomplished her goal of becoming no one. Dany has been removed from everyone she knows and placed in an uncomfortable and undesired situation. We have the return of Rickon and Osha for the first time since season 3 (obvious with Rickon being at least a foot taller), and delivered into the hands of the enemy. The rift between the Lannisters and the Faith grows deeper. Bran’s visions start to tell a new story about Ned’s history. For all his faith to being honorable, there are more and more instances of Ned whitewashing details of his past. Sure, all is related to his sister, but that doesn’t change anything really. Team Dany operating without Dany is kind of hilarious, especially Tyrion working with two folks that can’t trade barbs with him the way Varys does. The ramifications of Jon’s resurrection begin. Melisandre thinks he’s a Christ figure, Thorne and the others are put to death, and he resigns his post as Lord Commander. With everything going on, it’s all very exciting, but does feel a bit like the show is rushing through some beats. Season six was the first season where nearly every storyline moved beyond the books, and while it’s obvious the show knows where it’s going and where the books are going, it does feel slightly rudderless. It’s all very exciting and, with the exception of Arya’s story, plays out expertly, at least. Season 6 in just a few episodes feels more engaging than season 5 and definitely has the feel of building towards something.

Quotes:
Davos (to Jon): You were dead. And now you’re not. That’s completely fucking mad, seems to me. I can only imagine how it seems to you.

Tormund (to Jon): I saw your pecker. What kind of god would have a pecker that small?

Tyrion: A wise man once said a true history of the world is a history of great conversations in elegant rooms.
Missandei: Who said this?
Tyrion: Me, just now.

Jon: My watch is ended. 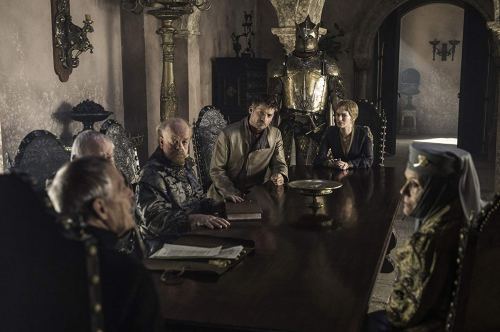 Foreshadowing: Tommen has always been easily wooed by other characters. First Cersei, than Margaery, and now it seems the High Sparrow is exerting influence. It seems we have a whole population of Dothraki underestimating Dany. That never ends well for them.

Title: Seems to imply Smalljon Umber and his broken oath to the Starks, but also in reference to Jon Snow whose death justifies him breaking his oath to the Night’s Watch.

Deaths: Shaggydog (sadface) was killed and beheaded prior to this episode. Thorne, Olly and two others are hanged by Jon for their mutiny in killing him. Also Arthur Dayne is killed by Ned and Howland Reed in the flashback, along with a few others.