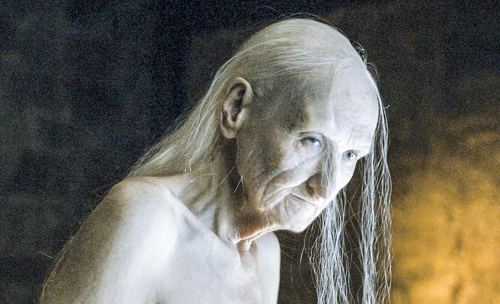 Synopsis: Wolves howl at Castle Black as Jon Snow’s bloody body lies underneath the “traitor” sign when last we left it. Ghost tries to get out of his cage, and his moans alert Davos, who is the first to discover Snow. Soon, Tollett and others arrive and take his body inside. Tollett accuses Thorne, and Davos thinks they need to stick close to those they can trust. Melisandre soon enters and sees Jon. She is saddened and confused. She saw him in the flames, fighting at Winterfell. Thorne addresses the Night’s Watch. He admits his hand in Jon’s death, but says he killed him because Jon betrayed the Night’s Watch by letting the Wildlings through their gates. Back with Snow, Tollett is ready to die but Davos says they don’t have the numbers, but they aren’t the only ones who owe their lives to Jon Snow. Edd leaves in a rush. In Winterfell, Ramsay says goodbye to Myranda and vows to avenge her death, but also has her fed to his dogs. Roose chastises Ramsay for letting Sansa escaping and how her escape affects his standing. Theon and Sansa run through the snowy woods as they hear dogs coming after them. They trudge through a freezing lake to get some distance, but they don’t make it far enough. The searchers have found them but, thankfully, so have Brienne and Podrick. They fight off the men, and Brienne once again offers her protection to Sansa. This time, Sansa accepts. Jaime arrives home, and Cersei rushes out to meet him and her daughter, but as he sails ashore, she sees a body and understands that her daughter is gone. Cersei and Jaime cry about it later, where Cersei recounts the prophecy of Maggy the Frog. Septa Unella reads the holy book with Margaery and urges her to confess but Margaery only asks about her brother. The High Sparrow interrupts, sending the Septa away. He tells Margaery that her husband misses her and also urges her to confess but she maintains her innocence.

In Dorne, Ellaria walks with Doran talking of Oberyn. When gets word of Myrcella’s death, Ellaria quickly stabs him in the heart, and Tyene kills his guard. As Doran dies, Ellaria chides him for being weak, and vows that the future is female in Dorne. Nymeria and Obara find Trystane and end his life as well. Tyrion and Varys walk through Mereen, surveying the damage. They note that things have grown more complicated in Mereen, which is growing worse with Dany’s absence. Varys knows that someone is in charge of the Sons of the Harpy and has tasked his little birds to discover whom. As the skies fill with smoke, they discover that all of Daenerys’ ships have been set afire. Daario and Jorah hunt for Dany while Daario gives Jorah shit for loving someone that doesn’t love him. Jorah sees that his greyscale is growing, but continues to hide it. They find the trampled land where Dany was taken and Jorah discovers the ring she left behind. Dany is forced to walk alongside the Dothraki, where she is tied and whipped. Two of the Dothraki talk shit about her, assuming she can’t understand them. They take her to their leader, Khal Moro. Dany reveals herself and her enormously long title, but the Dothraki laugh at her. She is nothing to them. But when she says she was married to Khal Drogo, they vow to not touch her but say she is expected to live out her days with the other widows. In Braavos, a blind Arya begs in the streets. She makes a few coins but then the Waif (ugh, the Waif) shows up to beat her with a stick, and after knocking her down, vows to see Arya again the next day. Thorne knocks on Davos’ door and grants everyone amnesty if they surrender, but Davos and the Crows stay behind the locked door. Davos wonders aloud if Melisandre can be of any help. He says he’s seen what she’s capable of. In her chambers, the Red Woman strips down, and when she removes her necklace,  Melisandre is revealed to be an old, gray, decaying woman.

Comments: Brienne and Sansa exchange vows, in the same way that Brienne did with Catelyn in the second season. This mirroring of history is one of the things Game of Thrones can do so well, with its emphasis on loyalty and family trees that very few shows could rival. Most stories pick up right where they left off, with Jon Snow freshly dead, and Arya freshly blind. Jaime and Cersei mourn another child. Man, it’s like this couple can’t catch a break. It wasn’t too long ago they both lost their father. What are the odds? After her walk of atonement last season, and after losing Myrcella, Cersei is exactly where no one should want her: backed into a corner feeling like she has nothing left to lose. The entire plot of Dorne feels like a quick fix to a story that the showrunners realized they would never have time to properly do justice. Oberyn made an instant impression, but Doran did not, so his death was met with a bit of a shrug. Trystane as well, who had no purpose now that Myrcella is gone. While the feud between Ellaria and the Lannisters is understandable, there’s really not much else that can be done with it right now. Dorne and the Sand Sisters are merely just another domino waiting to fall. Most of the focus of the episode is on the death of Jon Snow, which they went to a lot of effort to assure the audience he was dead, but the major purpose of that is to create surprise when he might no longer be. It’s not like this could’ve been handled successfully in another way. If these are the story beats, they don’t try to drag it out longer than necessary, but this episode was just the chapter we have to endure to get to the next one. As with a lot of Game of Thrones season premieres, it feels a bit short on story but gets elevated because of the excitement of waiting so long to see it.

Quotes:
Ramsay: She’s good meat. Feed her to the hounds.

Jaime: Fuck prophecy. Fuck fate. Fuck everyone who isn’t us.

Nymeria (to Obara): You’re a greedy bitch, you know that?

Foreshadowing: Davos’ suggestion that Melisandre could be of help isn’t so much a hint as a big, bright neon sign. Melisandre saying she saw Jon fighting at Winterfell is a nod to a couple different things that are set to happen.

Title: Melisandre’s nickname, spoken by the Night’s Watch men who discover Jon Snow and Davos himself.

Deaths: Ellaria stabs Doran. Tyene takes out his main guard, and his maester. Trystane is stabbed (through the head!) by Obara. Brienne and Podrick fell a bunch of Ramsay’s men.