Synopsis: Melisandre takes the thawing snow as a sign that their sacrifice of Shireen was the right move. She pushes Stannis to continue his march. He is cold to her. When they regroup with their men, they are informed that half of the army left in the middle of the night, but there’s worse news. Stannis is shown Selyse has hung herself. Stannis is then informed that Melisandre has left, but he commands his remaining troops to prepare for battle. Jon recounts the battle of Hardhome for Samwell, and the newly discovered info that Valyrian steel can kill a White Walker. Sam asks Jon to send him away to the Citadel to learn to become a maester. Snow doesn’t want to lose his friend and best advisor, but Sam says if he stays that Gilly and baby Sam will die and he will die trying to save them. Snow finally agrees. Sam also hints that he got his v-card punched. Later, Jon bids them farewell. Stannis and his army arrive at Winterfell, which Podrick is the first to see. He runs and tells Brienne. Sansa breaks out of her room and makes her way up to the tower to light the candle herself, just as Brienne gives up on watching for it. As Stannis and his men near the castle, the Bolton army meets them and Stannis already defeated draws his sword anyway. Sansa watches from the tower. Later, Stannis’ army in tatters, bodies strewn everywhere, an injured Stannis fights off two Bolton men, but falls to the ground, injured. He looks up and sees Brienne. She introduces herself and recounts watching Renly die. Stannis admits his part. Brienne asks for his last words, but he just tells her to do her duty, and she does. Sansa sneaks around Winterfell until she is caught by Theon and Myranda. Myranda taunts Sansa and draws her bow and arrow, but before she releases it, Theon pushes Myranda over the wall. Splat. They hear the sounds of the drawbridge oening and realizing Ramsay is returning, Sansa and Theon jump into a snow bank on the outside of the castle.

In Braavos, Meryn tortures three young girls, but one isn’t so crying enough, so he decides to deal with her alone. He is stunned when the young girl turns out to be Arya Stark, who quickly makes with the stabby stabby. First in the eye, then all over. She tells Meryn who shes is and why she’s killing him and then, as if the several dozen stab wounds weren’t enough, she slits his throat. Later, when she returns the young girl’s face she borrowed to the hall of faces, she is caught by Jaqen and the Waif (ugh, the waif). They scold her for taking a life that wasn’t commanded by the many faced god, and said only life can pay for a life. Jaqen produces a vial of poison, and Arya is shocked when he drinks it himself, and falls to the ground. Arya cries out, and the Waif (ugh, the Waif) asks why she’s crying. She says Jaqen was her friend, but the Waif becomes Jaqen and the body on the ground in no one. Arya pulls off one face after the other until she sees her own face on the body and then goes blind. Yeah, I know, but that is exactly what happened. Ellaria gives Myrcella a kiss goodbye as she boards a ship with Jaime and Bronn to head back to King’s Landing. Jaime returns Myrcella’s necklace and they talk about her future. Jaime talks about the complicated nature of love and Myrcella says she knows, about him and Cersei. She says she’s happy that Jaime is her father. As they embrace, Myrcella’s nose starts to bleed and she begins to asphyxiate. She falls down, dying in his arms. On the beach, Ellaria takes the antidote, having poisoned Myrcella with a kiss. The Sand Snakes approve. Tyrion, Daario, and Jorah sit in Dany’s throne room. I guess we’re just going to assume how they got out of those fighting pits after Dany took off. Missandei arrives with Grey Worm and they update him on the fight. Jorah and Daario decide to track down Dany and leave Tyrion to lead in Dany’s stead in Mereen, with Grey Worm the face for the people. No one feels great about this new arrangement. Tyrion watches Jorah and Daario leave just as Varys arrives in town. Elsewhere, Dany tries to help Drogon as he licks his wounds, but he knocks her off when she mounts him, still the rebellious son. Dany has no idea where they are or how far they’ve gone but heads out in search of food. Dany is startled by oncoming horses, and a horde of Dothraki arrive over the hill. She drops one of her rings on the ground just in case she gets taken. 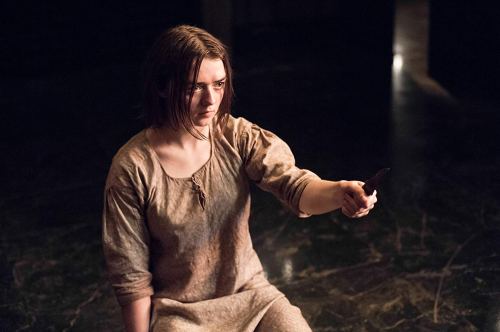 A defeated and dehydrated Cersei cowers in her sell as the Septa arrives again urging her to confess. She relents. Cersei appears in front of the High Sparrow admitting to sleeping with Lancel, outside of marriage. He asks if there are any other men, but she says no. He mentions the rumor of her and Jaime and that her children aren’t Robert’s, and she maintains that as a lie perpetuated by Stannis to aid his claim on the throne. Still, she begs for mercy. The High Sparrow says that she will have a trial for the crimes she hasn’t confessed to, but that she can return to the Red Keep as she waits, after her atonement. She is stripped bare, her hair is shorn, and she is marched through the streets, naked as the townfolk shout at her, pelt her with fruit and shit, as the Septa rings a bell and chants “shame” behind her. Cersei struggles to make it through the town and even collapses, but pushes through, stumbling through the front doors as Qybrun, Pycelle and Kevan await her. Qyburn introduces the newest member of the Kingsguard, a revived Mountain, who carries Cersei to her chambers. Davos begs Jon to let the men of the Night’s Watch or the Wildlings help Stannis’ fight but Jon says they don’t have the men and the Wildlings will never fight for Stannis. As Davos continues to argue, they are interrupted by Melisandre’s arrival. Davos asks of Shireen and Selyse, but Melisandre’s look says it all. Well, it says they are gone, not the whole story. Jon is in his chambers when Olly arrives for him, saying someone has seen his uncle Benjen. Jon runs out to the courtyard where he comes across a sign that reads “traitor.” He turns around and Thorne stabs him in the gut. “For the watch,” he says. As do countless others. Jon falls to the ground as a tearful Olly delivers the final blow, “for the watch.” They leave Jon to die alone.

Comments: Of all the deaths on the show, the one of Jon Snow was an interesting moment. Despite what the show had trained us for, losing Ned, losing Robb and Catelyn, and as sad as it was, especially seeing little Olly delivering the death blow, it just didn’t quite feel real. I don’t know why. It was the end of the season, perfectly in keeping with other deaths. The show was unafraid to kill main characters before, but they had also established resurrection existed in this universe, and that Melisandre is at least aware of these practices. It’s not surprise she showed back up at Castle Black right as these things were happening. It became less a thought of “oh my god, they killed Jon, you bastards,” and more about “when is he coming back.” Arya’s story continues to be the weak link in the season. At first, it was too slow, but this episode, it definitely felt like it was rushing through the major moments. She got her revenge on Meryn. She got caught by Jaqen. She went blind. All of these connected by too many moments that didn’t make sense, and didn’t try to. Other than her revenge on Trant, and the moment where she refused to give up needle, none of her story the entire season served any greater purpose or felt remotely necessary, and for a series where every conversation feels important, and usually is, this whole Arya segue is just a glaring negative spot. Sansa’s story also picks up with speed, but plays out more successfully. In just a few short moments we see her, for the first time ever really, taking control of her own destiny. That she is suddenly tied to Theon for survival is another mix of characters that the show does so well. Catelyn and Tyrion, Brienne and Jaime, Arya and the Hound, all of these provided great moments and interesting clashes. Dany’s story continues to take another turn, as Drogon isn’t as controllable and she thought flying off with him, and the oncoming Dothraki horde doesn’t feel entirely in her corner. Her small council grows, and the addition of Varys to the mix is certainly welcome. Cersei’s punishment didn’t fuel a sense of forgiveness, in her or towards her character. It only seemed to instill a greater need for revenge. How great will be seen. Still, her Walk of Atonement was horrendous, and with mostly just her face (as the rest was a body double), Lena Heady conveyed a wide range of emotions from defeat, to remorse, to shame (naturally), fear, as well as anger, pride, strength, and a little murdery. And another house is done as the Stannis falls. Sure the King is technically a Baratheon, but no one really believes that and it’s definitely the Lannisters that are the real power. It was good to see Brienne get a win.

Quotes:
Brienne: In the name of Renly of House Baratheon, first of his name, rightful king of the Andals and the First Men, Lord of the Seven Kingdoms and protector of the realm, I, Brienne of Tarth, sentence you to die. Do you have any last words?

Sansa: If I’m going to die, let it happen while there is still some of me left.

Jaime: We don’t choose who we love. It just, well, it’s beyond our control. 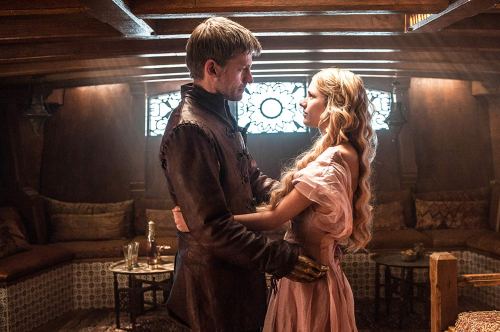 Foreshadowing: The Mountain being Cersei’s savior and servant suggests a new level of importance for him. Cersei confessing only to the crimes she knows there is proof against her shows that she hasn’t truly accepted anything.

Title: Cersei throws herself at the Mother’s Mercy, as she says, but really it’s the High Sparrow. Also a bit of an homage to Selyse, and that after sacrificing her daughter she had no mercy left for herself.

Deaths: Selyse hanged herself. Stannis kills a couple of Bolton’s men after most of his army is slaughtered. Stannis was killed by Brienne. Theon tossed Myranda to her death. Arya stabs the shit out of Meryn (though it’s not the first eye stabbing we’ve seen). Myrcella is poisoned by Ellaria. Jon Snow is stabbed by the Crows that feel he’s a traitor.