Game of Thrones – Episode 5.9 “The Dance of Dragons”

Synopsis: In the middle of night, Stannis’ army campout lights up in flames. Apparently, those twenty men Ramsay said he could use sneaked into the camp for a little arson. Stannis contemplates his next move. Jon Snow and the Wildlings return to Castle Black. Thorne opens the gates and the Wildlings pass through. He tells Sam that he failed but Sam points out that everyone walking is alive because of him. The Crows watch angrily at the Wildlings, but do nothing, save for marveling at the sight of the giant. Jon smiles at Olly, but the boy isn’t feeling sunny towards Snow. Stannis sends Davos to Castle Black to ask for supplies and food. Davos offers to take Shireen but Stannis wants his family with him. Davos visits Shireen who tells him of the story she is reading-A Dance of Dragons, about a battle that split the Targaryen family. He gives her a small carved deer as a thank you for teaching him to read. Jaime is brought to Doran, who questions him on sneaking into Dorne. Jaime tells of threat they received with Myrcella’s necklace. Doran glares at Ellaria. Doran toasts to King Tommen and agrees to send Myrcella back to King’s Landing, so long as Trystane can accompany her. Ellaria storms out after chastising Doran. Jaime asks for the return of Bronn, and Doran lets Trystane make the decision. He agrees on one condition. Bronn is brought in front of the prince and is slapped. Arya, in her new identity as the oyster girl is walking through Braavos but when she is visits the man she is sent to spy on, she is surprised to see Meryn Trant  arrive with Mace Tyrell. Arya follows their entourage, what with Meryn being on her list. Tyrell meets with representatives of the Iron Bank and Arya keeps close watch. She follows Trant to a brothel and sells her wares to the patrons while watching Trant turn down all the girls for being too old, until an entirely too young girl is brought forth. Arya is shooed away before she can follow. She returns to Jaqen and says she couldn’t complete her mission but he is suspicious. Doran brings Ellaria and the Sand Snakes before him and makes Ellaria kiss the ring, literally. He expects her loyalty and gives her a second chance, but cautions her that he won’t allow a third. Ellaria visits Jaime and questions him on his love for Cersei. She says that incest isn’t frowned upon in Dorne and that you can’t control who you love. She concedes that Myrcella is innocent of Oberyn’s death, and Jaime might be as well.

Stannis visits Shireen and she tells him about the Dance of Dragons. He speaks to her cryptically about destiny and tough decisions. Shireen is supportive even though she doesn’t know what his issues are. She will help in any way. She hugs him and he asks for her forgiveness. Shireen clutches her toy as she is led to Melisandre through Stannis’ army. Shireen screams for her father as she is tied up. Selyse and Stannis watch and Selyse tells him that it’s what the lord of light wants. Shireen begs for help as Melisandre lights the post. Selyse changes her mind and charges forward but soldiers hold her back. Shireen screams as she’s burned alive. Selyse collapses and Stannis steels up. In Mereen, the fighting pits are reopened and Dany sits with Hizdahr, and the rest of her council. Daario taunts Hizdahr as the fighters battle. Dany is disappointed in the killing, as is Tyrion, but Hizdahr notes that it is a symbol of greatness of their city. Dany is surprised to see Jorah as the next champion fighting in the pits. They all watch as Jorah bests a number of men, but Dany winces every time he falls down. Tyrion tells her she can end this, but Hizdahr says no. Jorah wins, but throws a spear right at Dany, felling the Son of the Harpy that was attempting to kill her. Chaos erupts as a horde of Sons begin killing everyone, most notably Hizdahr. Tyrion rescues Missandei, as Jorah, Daario, Dany and a few Unsullied look for an escape plan. They do not find one and are in the middle of the pits as they are surrounded by the Sons of the Harpy. The Harpies get the upper hand, but then a familiar cry as Drogon arrives and chomps a few, burning a few more. The Sons chuck spears at Drogon, injuring him, but he continues to fight. Dany approaches, pulls out one spear and then mounts the dragon commanding him to fly, as they exit stage up. 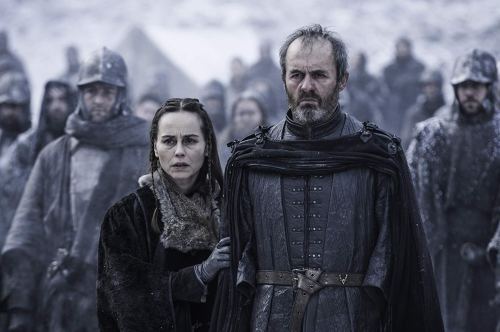 Comments: Again, the dragon animation is top notch. And the show hits you with a twist when you aren’t expecting it. The fighting in the pits was already exciting, with so much subtext going on between Dany and Jorah, but the attack from the Sons of the Harpy and the reappearance of Drogon was totally thrilling. No great loss in Hizdahr, and even though his character won’t be missed, there was at least the added weight of what his death means in terms of the attack from the Sons. The more horrific death, and easily one of the most tragic in all of Thrones history, is that of Shireen. A child, a complete innocent, sacrificed in service of a dark religion that is ultimately for naught. Selyse’s second guessing of the ritual, too late to change it, hints at her future, and it’s suddenly all the more evident why Stannis sent Davos away, as he never would’ve stood for this. Arya’s story gets a reprieve from how uninteresting it has been with the appearance of some Westerosi, obviously Meryn being on her list will command her attention. Though it’s given relatively little screen time, the aftermath of the Battle at Hardhome continues to have far-reaching consequences, the bulk of which will hit in the next episode.

Shireen: It’s all the choosing sides that made everything so horrible.

Ellaria: No wonder you can’t stand, you have no spine.

Tyrion: It’s easy to confuse what is with what ought to be, especially when what is has worked out in your favor.

Tyrion: In my experience, eloquent men are right…every bit as often as imbeciles.

Foreshadowing: Olly’s cold shoulder or Snow will only grow colder. Shireen’s comment about choosing sides definitely suggests where we always get into trouble and is a harbinger of so many storylines.

Title: The book Shireen is reading, in reference to a battle of Targaryen’s that divided the kingdom.

Deaths: Shireen, burned at the stake by Melisandre. Hizdahr, stabbed in the chest by the Sons of the Harpy. Numerous other Mereenese, some in the fighting pits, and those that the Sons butchered.