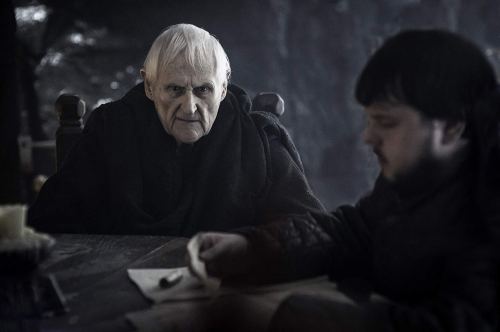 Synopsis: Missandei visits Grey Worm as he recovers, noting for the audience that he lived. Not so lucky for Selmy, as his body is brought to Dany. Dany calls for the leaders of all the great families to be brought to her, especially upsetting to Hizdahr zo Loraq, one of her advisors, as he is the leader of his family. She brings the leaders to the dungeon where she has her dragons chained up. One of the leaders is fried up by the dragons and used an appetizer, and as a warning to the others. Sam reads a note to Maester Aemon Daenerys’ rise to power in Mereen, and Aemon is sad that as her relation, he can’t offer her any help. Jon interrupts to speak with the Maester, alone. He tells the old man that he needs his advice. He has to give an order and half the men will end up hating him. Aemon tells him that half the men already hate him so he might as well do it, not even knowing the decision with which Jon is struggling. Jon visits Tormund in an attempt to make peace. He offers to unchain him, and have him go North to gather the remaining Wildlings. He will let them south of the wall, and give them a place to settle if they promise to fight with him in the war against the White Walkers. He unlocks Tormund’s chains. Tormund agrees, but only if Jon goes with him. As Jon brings the subject up with the men, it indeed goes over poorly. Stannis and Davos watch as Tollett and the others try to dissuade Jon. In his chambers, young Olly isn’t thrilled either, as the Wildlings butchered his family.

Pod and Brienne have set up shop in a farmhouse outside of Winterfell to keep an eye on Sansa. She talks to a local man about helping her to get a message to Sansa inside. In the castle, Ramsay and Myranda nakedly argue over his marriage to Sansa, who makes Myranda jealous. He threatens her, but they make up, and continue to bang it out against the window. Sansa’s handmaiden brings her a message, that she’s not alone and if she ever needs help to light a candle in the highest window of the broken tower. Outside, Sansa checks out the tower, and Myranda introduces herself. She is nice to her, and tells Sansa she has a surprise for her and brings her to the kennels where Sansa comes across a cage where Theon is sleeping. Sansa is startled, and when she calls his name, he sends her away. Later, Theon dresses Ramsay and he confesses that Sansa has seen him. Ramsay forgives him. At dinner, Sansa and Ramsay dine with Roose and his new wife, Walda. Ramsay has Theon bring them wine at dinner, where he says Theon has been punished for what he did to Sansa’s brother, since she still believes they are dead. Ramsay forces Theon to apologize for their murders and then invites him to give away Sansa at the wedding. Roose and Walda announce they are having a baby and that they think it’s a boy. Afterward, Ramsay expresses his displeasure with his father, and questions his position if it is in fact a boy. Roose tells the story about Ramsay’s mother. He had her husband killed and raped her beneath his hanging corpse and when she reappeared a year later with a baby, he thought at first that he should drown the boy, but decided against it. Roose then tells his son about Stannis’ pending attack and confirms his allegiance. 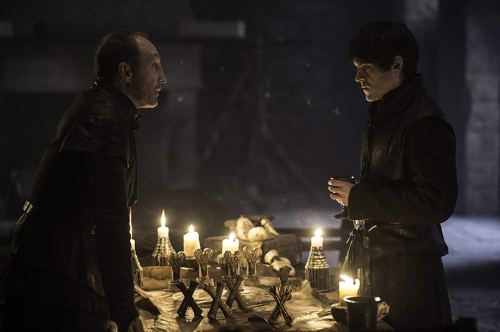 Sam and Gilly are the library at Castle Black and he tells her about the Citadel. Stannis meets with Sam and learns that Sam killed the White Walker with Dragonglass, something that no one was aware was a thing. Stannis asks Sam to keep reading in case there are other ways to defeat them. Stannis goes to Davos and says that it’s time, they march at sunrise. He adds that his wife and daughter will be along for the ride. In the morning, Shireen and Selyse saddle up with the others as Stannis and his army take their leave of Castle Black. Jon wishes them luck, as Melisandre eyes him from afar. Grey Worm finally awakens and MIssandei tells him he’s been out for three days and that Ser Barristan didn’t make it. Grey Worm says he failed, but she assures him that he fought valiantly. He said he was afraid, not of death, but of never seeing her again. She kisses him. Dany asks Missandei her advice on what she should do. Missandei talks Dany up. Dany visits Hizdahr zo Loraq in his cell. She admits she was wrong about the ways to handle Mereen. She agrees to reopen the fighting pits, but to free men only. To appease the leaders, Dany offers to marry a leader of a Mereen family, and tells him he’s the lucky man. Tyrion tries to get Jorah to talk, but Mormont remains quiet. Tyrion recognizes the scenery of their surroundings as Valyria. As they sail through a narrow river, they marvel at Drogon who is seen flying overhead. They are further startled when some of the Stone Men jump into their boat. Jorah fights them off cautioning to not get touched by them. Tyrion goes overboard and is dragged under water, but moments later, he awakes on a beach where Jorah has dragged him ashore. Jorah walks off to search for some food and water and pulls his sleeve away to see that he has been infected with grey scale. 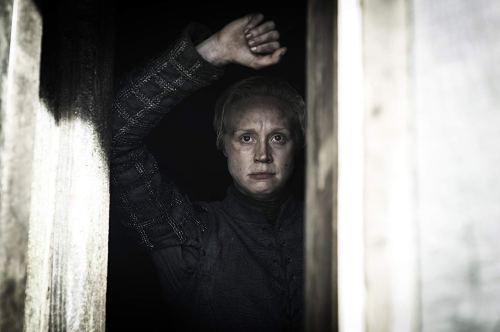 Comments: Missandei’s comments about Dany are entirely too on the nose. She says she’s always thought of new ways to get out of any given situation, and it’s true, from her episode with the witch, to how she got the Unsullied, to taking over Mereen, she has continually upended expectations. It’s her basic story, which is why she’s a great character to watch and root for, but it wasn’t exactly necessary to spell that out so directly. Her approach to this situation, to marry Hizdahr is certainly unexpected, and will likely cause issues with her naked friend Daario. Things with Stannis and his march against Bolton begin to heat up, especially with the weirdness of taking his wife and daughter and side-piece with them. While Joffrey and Ramsay both had similar character traits in taking such delight in tormenting Sansa, she’s smarter and less vulnerable than she was with Joffrey. She knows Ramsay’s a sadistic prick from the start and has learned to take delight where she can find it, such as her small hint of a smile when Roose announces he’s going to have another boy. While Joffrey, Cersei, and others on the show have shown a penchant for evil, no one has ever been quite so sadistic as Ramsay. His portrayal by Iwan Rheon is brilliant, with every look and gesture coming off as delightfully depraved and maybe because we survived Joffrey, it doesn’t feel so interminable waiting for him to get punished.

Quotes:
Myranda: I saw you staring at her.
Ramsay: I’m going to marry her. That will involve looking at her from time to time.

Tyrion: I am a person who drinks. People who drink need to keep drinking.

Foreshadowing: Sam tells Gilly about the Citadel, which has the biggest library in the world, some place they should visit. While Jon knows that his decision will be unfavorable, he’s probably not aware of how bad it can get.

Title: Spoken by Aemon to Jon in reference to him growing up. “Kill the boy and let the man be born.” Obviously has other implications as Roose mentions being met with a young Ramsay and debating on drowning him.

Deaths: Dany made one of Mereen’s leaders a nummy treat for her dragons.