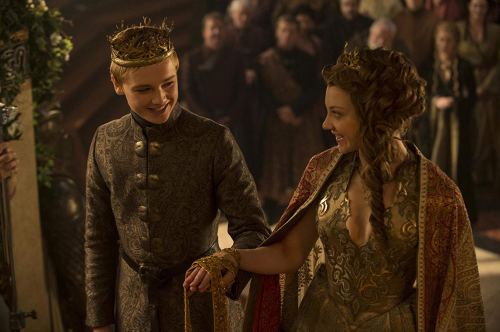 Synopsis: Inside the House of Black and White, a vast room with a fountain in the center and statues all around, Arya sweeps up while Jaqen tends to another subordinate. Arya wants Jaqen to teach her more than janitorial work but he says she must give herself to the Many-Faced God if she wants to learn to be a faceless man. In King’s Landing, Tommen and Margaery are wed and then consummate their marriage as Tommen learns that sex is awesome. In the afterglow, Margaery brings up her new mother-in-law and suggests that Tommen will never come into his own with her always by his side. Tommen and Cersei take a walk in the morning, and Tommen asks Cersei about Casterly Rock, and he asks her if she would be happy there. Cersei visits her new daughter-in-law and does her best to act sincere, offering her support. At Winterfell, Theon/Reek works in the courtyard when he sees some freshly flayed bodies. As he serves his master Ramsay, Roose and his son discuss holding the North and the elder Bolton questions how they hold their new territory with their alliance with the Lannisters being tenuous since Tywin’s death. Roose says the best way to secure their hold is by marriage. And he has a suitable candidate. Sansa and Baelish make their way towards Winterfell when Littlefinger tells Sansa that she’s going to wed the son of the man who murdered her brother. She’s not pleased to be passed around again, but Littlefinger charges her to take control of her own destiny as she returns home. Brienne and Podrick continue to follow Sansa from a distance. Brienne softens towards Pod and offers to train him. She tells him a story of how she came to meet Renly and why she wanted to serve him. She vows to avenge Renly by killing the man responsible-Stannis.

Stannis meets the new Lord Commander of the Night’s Watch, Jon Snow and his freshly-appointed steward, Olly. Jon refuses Stannis’ offer to legalize him and give him the Stark name. Stannis suggests Jon might be able to turn the Wildling prisoners to their side after Mance’s death. He also advises Jon to send Thorne away. After Stannis leaves, Davos tells Snow that Stannis sees something in him. Davos urges Jon to stay true to his oath to guard the realm and that the realm suffers with the Bolton’s in charge at Winterfell. Arya waits in a room when she is approached by a young woman, the Waif (ugh, the Waif) who asks her questions and then beats her for the answers. Jaqen enters and tells her that if she really wants to become no one, she shouldn’t have so many of Arya Stark’s things. Arya dumps her clothes in the water (first wardrobe change for Arya since the first season!) but can’t bring herself to get rid of needle, so she hides the sword among some rocks and returns to sweeping. Jaqen brings her to the Waif (ugh, the Waif) and the girls wash the body of a dead man. Arya asks what happens after they wash him, but the Waif (ugh, the Waif) does not answer. Sansa arrives at Winterfell where she meets Ramsay. Myranda isn’t at all stoked on her presence. Sansa is shown a room (her old one?) and a servant gives her a knowing nod, “the North remembers.” At Castle Black, Jon deals with the new business of his post, and gives a promotion to Alliser Thorne, naming him First Ranger. He also gives Janos a new post, but Slynt refuses. Jon reiterates his command, and again Slynt tells him to shove it up his ass. Jon tells his men to take Slynt outside and tells Olly to bring him his sword. Slynt practically wets himself apologizing and crying for mercy, but Jon takes his head. 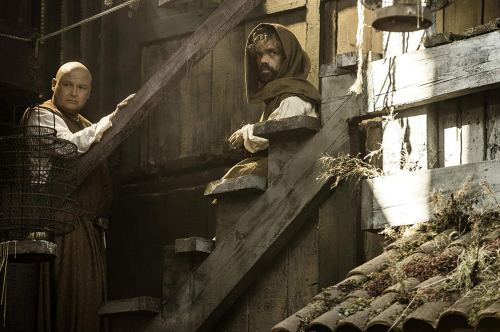 Stannis nods in approval. In the brothel, the high septon who married Tommen and Margaery is having some post-wedding fun picking with naked maiden he’s going to fondle when Lancel and other sparrows kick the door in and take him off to punishment. They parade him through the streets naked chanting “sinner” behind him. Later, the septon approaches the small council and demands retribution for his treatment, and wants them to execute their leader, the High Sparrow. Cersei with some knights in tow, approaches the smelly, poor part of town and asks to see the High Sparrow. He is handing out food to the hungry, when Cersei questions him about the incident with the septon. The High Sparrow defends the actions saying that hypocrisy is a cancer. Cersei agrees and says that faith and the crown are the two pillars that hold up the world, and they ought to look out for one another. The septon is now in a dungeon in the Red Keep. Cersei visits Qyburn and gives him a message to send to Littlefinger. She asks off his experiments with the Mountain and he says they are coming along. As he writes, the body of the Mountain quivers and shakes underneath a blanket. Ramsay assures Baelish he will never hurt Sansa, but we know he’s not good at telling truths. Roose hands Littlefinger the note from Cersei, and questions his loyalty to the Lannisters. Baelish says the Lannisters are weak with Tywin’s death and reminds him that the last time the North and the Eyrie were united they brought down the greatest dynasty the world had known. Going crazy in the cramped box they’ve been traveling in, Tyrion tells Varys they need to get out. As they walk through the town, Tyrion makes Varys join him in a brothel. Tyrion approaches a whore, but realizes that he can’t go through with it. He goes to relieve himself and before he finishes, Jorah Mormont stands behind him, throws a rope around him and gags his mouth. He’s going to take him to the queen, he says. 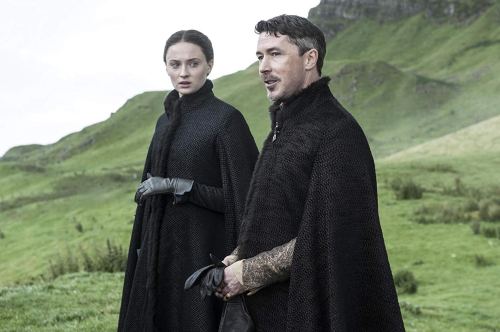 Comments: Another one of Ned’s sons follows in his footsteps of pronouncing the sentence and carrying out the punishment. Slynt was a waste of space and Jon knew it, and he got to show the crows that he’s wearing his big boy pants now. Cersei gets in deeper with the Sparrows, but may not have yet decided they could help her with her Margaery problem. The relationship between Margaery and Cersei is great. They both hate each other and really they are so much alike. Both crave power, but they have different ways of going about getting it. Cersei is sneaky and underhanded, and to be fair, so is Margaery, but Tyrell hides it better. She hides her machinations behind a smile and passive-aggressive compli-sults. Cersei uses snark and threats. The common folk fear Cersei and adore Margaery, and Margaery uses this to her advantage. They make a great match. Arya is stumbling further down into her storyline isolation. It kind of makes me wish they rested her for a year like they did Bran. The union of Ramsay and Sansa is one of the more overtly political unions on the show and is expected to be one of the more sinister. Ramsay is probably the only full sadistic villain on the show, give or take a Night’s King who probably has some unknown noble reason to be doing what he’s doing. Littlefinger urging Sansa to take control of her own destiny, while being a pawn in one of his schemes is the height of hubris, it does continue her growth to a smarter, stronger woman. As big as the known world is, a lot of action is the result of people randomly crossing paths in bars and brothels.

Quotes:
Tyrion (to Varys): I need to speak to someone with hair. 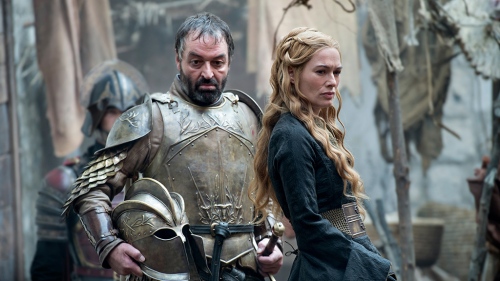 Foreshadowing: More side comments on greyscale. This might be hinting at something bigger coming soon. Brienne’s constant threats against Stannis continue as they both move towards Winterfell from different sides.

Title: It’s the septon that first makes reference to the High Sparrow, and then reiterated by Cersei and the Sparrow himself.

Deaths: Slynt’s head hit the floor after telling Jon to stick it.