Game of Thrones – Episode 4.9 “The Watchers on the Wall”

Synopsis: Jon and Samwell are atop the wall keeping an eye out for the Wildling attack. Sam asks Jon about Ygritte and notes that there’s nothing in their vows that forbids them from sexing, marrying and fathering children, sure, but the rest has some wiggle room. At the Wildling camp, they prepare for the attack. Ygritte fashions some arrows while the others give her shit for banging out Jon Snow. She assumes he’s dead, but if he’s not, she promises to finish the job. She says she will kill anyone that tries to take that away from her. Maester Aemon visits Sam in the library. Sam is reading up on the Wildlings and Aemon says it’s because he loved Gilly. Sam denies it, but Aemon knows the truth. He admits he was in love once. When Sam leaves the library, he hears a ruckus at the gate. Gilly is alive! And is begging to be let in with baby Sam. The elder Sam swears that from now on, wherever Gilly goes, he goes. The alarm sounds. Jon heads to the top of the wall and sees a massive fire below, just like Mance promised. Thorne tells Jon he’d be well within his rights to throw him an “I told you so” about sealing the tunnel, but if they survive, they’re still not gonna be pals.

Sam hides Gilly in a pantry in the basement of Castle Black. She doesn’t want him to leave her again, but he has to fight with his brothers. He swears to her he won’t die. Near the gate, Sam peps up Pypar as Ygritte spies on them. She returns to her camp and readies her camp. They march towards the wall, with Thens, mammoths, and giants in tow. Slynt tells Thorne they are attacking the South Gate and he gives Janos control of the tower. Thorne rallies his troops and they takes on the Wildlings that make it over the wall. As Tormund and his crew make their way into the gate, Pyp and Tarly flee. Slynt is afraid to act at the tower so Grenn convinces him that Thorne was asking for him. Jon assumes command and they start to pick off the Wildlings below, but the Wildlings get their kills in as well. Slynt arrives below where the war rages, but he hides out in the pantry where he finds Gilly. Pyp gets his first kill, but Ygritte puts an arrow in his throat and he dies in Sam’s arms. At the gate below, the giants and their mammoth prepare to bust the gate down. Jon sends Grenn and some men down to hold the gate. Thorne and Tormund get into a one-on-one swordfight. Thorne holds his own until he’s knocked off a ledge is pulled away. From the top, they take out one of the giants and use fire to send the mammoth running away. Sam  makes his way up top to seek reinforcements, Jon returns with him and leaves command of the tower to Tollett. One of the giants makes it in as Grenn and his men prepare to stop him. They recite their oath to psych themselves up as he comes barreling towards them. Jon hands Sam a key and tells him he needs reinforcements. Sam frees Ghost, who proceeds to unleash hell. The Then leader, Styr, takes on Jon and they fight one-on-one until Jon takes a hammer to his head. As he turns, he sees Ygritte holding an arrow on him. She can’t shoot. Jon watches as she takes an arrow through the heart. He sees Olly holding the bow. Jon catches her as she fades away, telling Jon that they never should have left that cave. She gives him one more “you know nothing, Jon Snow,” before she dies.

As Wildlings scale the wall, Tollett lets a massive scythe loose and  knocks off parts of the wall and takes out every climber. The others on the ground retreat. Tormund, riddled with arrows, continues to fight on, but Snow tells him to stop. As he falls to the ground, he tells the men to put him in chains. Sam returns to the pantry for Gilly. He kept his promise. He turns to see Slynt cowering in a corner. As morning breaks, Sam acknowledges their victory but Jon says that Mance’s men will attack again that night. Jon decides he’s going to kill Mance, and that with him gone, the other factions will dissipate. Jon admits it’s a bad plan, but Sam hasn’t got a better one. As they make their way down to the gate, they see the remains of Grenn and his men and the giant they took down. Jon tells Sam they need to burn the bodies. As he makeas his way out the front gate he gives Sam his sword, in case he doesn’t come back.

Comments: Well, it’s episode 9, so now expectations are this will be a brutal ep. Much like “Blackwater” in season 2, this episode takes place in one location with one storyline. Both eps were directed by Neil Marshall. The 360 shot midway through the battle tracking all of the action is one of the best sequences Game of Thrones has put to film. The success of the show can be seen in the budget here. While so many other battles took place off screen, this one shows the full brutality of the battle, and there’s hardly any moments of relief (the way a drunk Cersei handled that in the season 2 ep). It was a lot more affecting than I remembered it being, with the death of Ygritte, and Jon and Sam’s goodbye at the end. Plus, Slynt, a character I kind of forgot existed, proves he’s an epic douchenozzle. Grenn wasn’t on much, but he was a good guy and his death was necessary, not all of the good guys can win, but also frustrating, because we want them to. Same thing with Pyp. They added extra weight to the battle since having characters we like perish keeps us invested. We knew there was no happy ending for Jon and Ygritte, but still held out hope. Jon’s ascension to leader moves forward a bit in this episode as he assumes command at the tower and shows that his men will follow, to the death if necessary. The bond between Sam and Jon grows stronger as he gives Sam his sword, that Jeor Mormont gave him.

Aemon: Nothing makes the past a sweeter place to visit than the prospect of imminent death.

Ygritte: We should have stayed in that cave.

Tormund: I should’ve thrown you from the top of the wall, boy.
Jon: Aye, you should have. 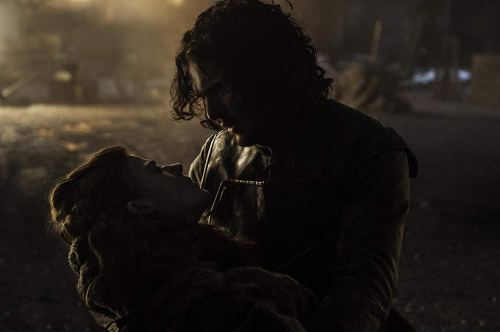 Foreshadowing: Olly got revenge on Ygritte for killing his parents, but he still wasn’t thrilled that Jon was sad about it. Slynt’s cowardice will be his undoing. And Jon and Sam’s conversation about banging girls will prove to be prescient for both of them, but one sooner than the other.

Title: Part of the oaths of the Night’s Watch men, Grenn and his men recite this as they prepare to take on a giant.

Deaths:  Ygritte takes out Pypar with an arrow. Olly takes out Ygritte, also with an arrow. Styr gets hammered by Jon. Grenn and his men die with the giant. Another giant, and dozens of others on both sides of the battle.