Game of Thrones – Episode 4.8 “The Mountain and The Viper” 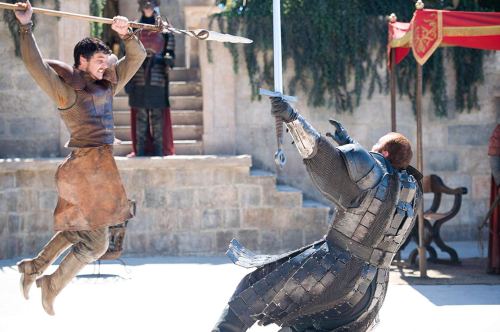 Synopsis: It’s a party going on in Mole’s Town, where Sam had left Gilly. She is doing some clean-up in a bar when her whore roommate chastises her for baby Sam keeping her awake. Before they can catfight, the Wildlings arrive. Tormund, Ygritte and the others slaughter the town. Gilly hides with the baby but Ygritte finds her, shushing her and leaving her be as blood drips through the ceiling behind her. Adult Sam is upset to hear about the massacre and he believes that Gilly is dead. They had a fellow brothers of the Night Watch that were a part of the slaughter as well. Jon knows that the attack on Castle Black is on next. In a stream, the Unsullied are bathing themselves. Grey Worm emerges from the water and sees a naked Missandei bathing herself further down and stares at with fascination. She catches him but doesn’t immediately cover herself. Later, she tells Dany of the exchange and Dany wonders if Missandei is interested in Grey Worm. Missandei admits she might be a little smitten. When Grey Worm comes to Missandei to apologize, the smitten kitten says he has no need to be sorry. Grey Worm thanks Misssandei for teaching him the common tongue and confesses he might be a little smitten too. Ramsay and his men are just outside a castle. He preps his slave Reek (Theon) to pretend to be Theon (who he really is) in order to fool the castle. The brainwashing runs deep, as Reek/Theon agrees. Theon meets with the master of the castle to surrender to Ramsay but he refuses. One of his own men takes an axe to the man’s head. He wants to agree to surrender if that means they live. Theon says it does. The men surrender, and for their agreement, Ramsay has them flayed. He tells Theon to get ready to head home.

Littlefinger meets with some leaders of the Vale who question him on Lysa’s death. He claims she jumped to her death. They want to hear from his niece (who is really Sansa). Sansa agrees to speak the truth. She confesses her true identity. She says that Littlefinger was lying to protect her. Sansa admits Lysa saw Baelish kiss her on the cheek and misconstrued the situation and that she did indeed kill herself. That behind them, Baelish talks strategy with the leaders. He says they need to prep Robin to grow up and leave the nest and be the leader the citizens can follow, but he probably has ulterior motives. Selmy is in Mereen when he receives a missive bearing the seal of the Hand of the King. He is startled by what he reads. Selmy approaches Jorah and gives him the note. It’s a royal pardon, signed by Robert Baratheon. Jorah was a spy. Jorah asks if he’s told Dany, but Selmy admits he told him first. Jorah asks to tell Dany himself in private but Selmy assures him he will never be alone with her again. In her throne room, Jorah approaches Dany. She asks why Robert offered him a pardon. Jorah admits he was a spy for Varys. He sent updates back home. Dany says Jorah betrayed her. He begs forgiveness, and confesses his love for her. She excommunicates him and says if he’s in the city the next day she’ll have his head. Jorah leaves. Ramsay meets with his father and gives him an update on his mission. Roose is impressed enough and as officially gives him his last name, he is now Ramsay Bolton. Ramsay is honored and pledges his loyalty. Baelish visits Sansa and asks why she lied for him. Better the devil you know, she offers. It was mostly self-preservation, as if they executed him what would they do with her. Later, when Petyr is telling Robin about his new adventures, Sansa enters, with a new dress, an homage to Baelish’s sigil. Arya and the Hound approach the gates of the Vale, and he introduces Arya to get them to seek passage. The knights tell her that Lysa died and Arya can’t contain her laughter. Jaime and Tyrion sit in the latter’s cell as Tyrion worries about his pending trial by combat. A bell rings and Jaime leaves, wishing his brother luck. 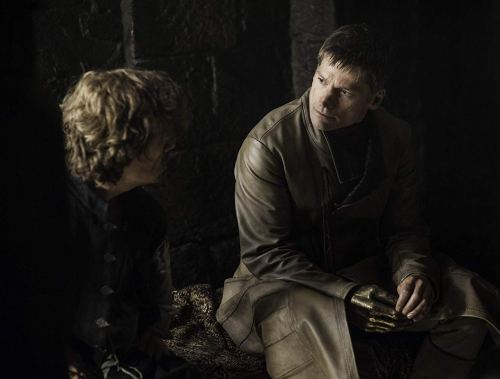 Tyrion meets with Oberyn, his champion before the fight. Ellaria is horrified when she sees how big the Mountain is. As the fighting begins, Oberyn is moves quick and lightly, dancing around the elder Clegane. He says he’s going to kill him but not before he confesses that he raped and murdered his sister and killed her children. He keeps repeating this as he dodges the Mountains attacks. Oberyn lands his spear in the Mountain’s stomach, dropping him to the ground. The Mountain begins to fade, but Oberyn demands he acknowledge his crimes against his sister. The Mountain grabs Oberyn, knocking him to the ground, punches out his teeth, and as he lies there, the Mountain confesses everything Oberyn asked, right before he crushes his skull with his bare hands. Ellaria screams. Tyrion is aghast. The Mountain collapses and Tywin says the gods have spoken, Tyrion will be put to death. 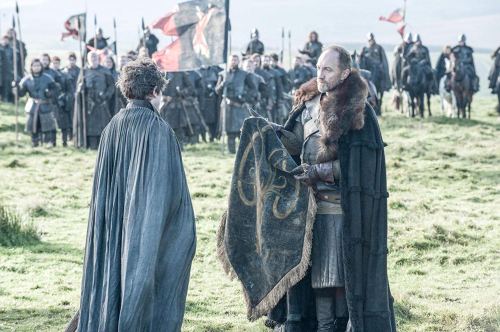 Comments: The transformation of Sansa begins. Baelish once told her that she didn’t know how to lie, and suggested she wasn’t that smart, but she has learned to adapt. Her lie to free Baelish is her taking control of her fate, refusing to be someone else’s pawn. Although this clearly keeps her in Littlefinger’s debt, her mockingbird dress and flirtatious demeanor suggests she’s learning how to play him as well. Sansa was never a favorite of mine, she never had the heroic charm of Robb, the underdog cunning of Jon Snow, or the wildcard rambunctiousness of her sister, but as she starts to come into her own she has gone from whiny brat to an interesting character in her own right. Her journey, along with Jaime’s, are two of the most compelling transformations in the show. While it was a small blip of a scene, Arya’s laughter that her aunt was dead was one of the episode highlights. A nice, well-earned humorous moment that was perfectly executed. Of course, she’s dead. Nothing has ever gone right Arya since she escaped King’s Landing, and it was too much to hope that this would be any different. And since no one else knew that Sansa is there, we’ve got another near miss for the Stark children. In as many episodes, Dany loses two of her right-hand men as she faces the betrayal of Jorah that was hinted at back in season 2 with the masked woman. This episode, though, is all about the trial. The expectation that Tyrion would win flowed throughout it. He’s a main character and Oberyn is such a new and exciting addition. Surely this would play out that way. Alas, it did not and we have yet another horrifying and gruesome death. Sure, there’s potential wasted there, but with Oberyn’s death we have another vendetta for the Lannister’s to face, and while Tyrion’s survival is expected, this paves the way for him to launch into new storylines.

Quotes:
Arya: I’d have killed Joffrey with a chicken bone if I had to.

Tyrion: Far too much has been written about great men and not nearly enough about morons.

Ellaria: You’re goint to fight that? (upon seeing the Mountain) 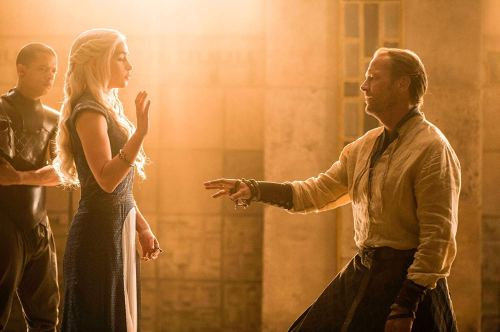 Title: The players in the trial by combat, with Oberyn’s sobriquet of the Red Viper facing off against Gregor Clegane’s namesake.

Deaths: Some men of the Night’s Watch and townsfolk are slaughtered by the Wildlings. The man of the castle takes an axe to the head, while other iron born men are flayed. Oberyn gets his skull crushed by the Mountain. Really, one of the more gruesome episodes, just in terms of the numbers.