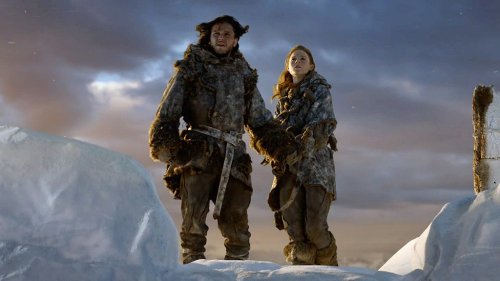 Synopsis: Gilly teaches Samwell how to build a fire. He shows her the knife he found. They plan to continue on to Castle Black and Sam tries to talk up how good the Crows frat house is. Osha and Meera continue frenemy-ing until Bran admonishes them to make peace. They are stopped when Jojen starts to seize. When he comes to he says he had a vision of Jon Snow on the wrong side of the wall surrounded by his enemies. Moving on to the wrong side of the wall with Jon Snow surrounded by his enemies, the wildling crew prepare to climb the wall. Ygritte tells Jon she knows he’s still loyal to the Night’s Watch and she says she doesn’t are so long as he’s loyal to her. Anguy shows Arya how to shoot a bow and arrow. When she aims, she notices someone approaching. It’s Melisandre and her men. Her and Thoros speak in High Valyrian and she notes how he failed his mission to turn King Robert to follow the Lord of Light. Thoros takes the Red Woman to meet Beric. She is surprised he has the power to bring him back to life so many times. They ask why she’s there and she says they have something the Lord of Light needs. Melisandre’s men take Gendry. Arya objects and chastises them when she sees Melisandre pay for gold. Arya yells at Melisandre who shows her first signs of fear ever. She says she sees darkness in Arya but assures her that they will meet again. And Gendry is hauled away. Snow and the others begin their ascent up the wall.

Theon continues to be tortured by the mysterious young man who is totally not Ramsay. He asks Theon which body part he doesn’t need. He starts to flay Theon’s finger while Ramsay wonders if he knows who he is. Theon guesses he’s a Karstark. It doesn’t go well for him or his finger. Representative for the Freys meet with Rob and the Tullys, to list out Walder Freys demands for a truce. It includes an apology, Harrenhal and for Edmure to marry one of his daughters soon. Robb questions the urgency for the wedding and they say that he’s an old man and a wedding will bring him peace. Yeah, that’s totally the reason. Edmure doesn’t want to do it, but the others talk him into it. Robb thanks him for paying for Robb’s sins. Jaime and Brienne (in a dress!) meet with Roose Bolton and they discuss what happens next. Bolton agrees to let Jaime continue back to King’s Landing so long as he tells Tywin that Roose had nothing to do with his maiming, but he refuses to let Brienne go with him. She’s accused of treason and must answer for her crimes. Tywin and Olenna argue about the plan for Cersei and Loras to marry. Olenna is against it, because Cersei is too old and the change will be upon her soon. Tywin thinks it’s important to quell the rumors about Loras, but Olenna says Highgarden is more West Hollywood when it comes to appreciating alternative life choices, and that the rumors of Cersei and Jaime are much worse. Not backing down, Tywin says the alternative is that Loras will be a member of the Kingsguard, never to marry or have children and the Tyrell name will die out with him. Olenna is at least impressed that Tywin has lived up to his reputation.

Back on the wall, with the wildlings tethered together on their climb, Ygritte and Jon fall when part of the breaks off. Orell cuts them loose and Jon has to act quick to save them. Loras and Sansa sit down to be dull together and talk of weddings. Oh, kids. Tyrion and Cersei discuss their situation and Tyrion wonders who has the worst part of this situation. He goes on to question her about trying to have him killed. He pretends to blame Joffrey for it despite knowing it’s Cersei and she lets him continue to think it. They both wonder when Jaime will return. Shae is helping Sansa dress and Tyrion arrives. He asks Shae to leave them but Sansa says it’s okay that she stays. Tyrion begins to tell them the news. Varys and Littlefinger sit in the throne room to talk about each other’s scheming. Baelish says he knows he thwarted his attempt to take Sansa. Baelish says he’s seen that Varys’ spies will suffer, and we see Ros riddled with arrows in Joffrey’s room. Sansa sees Littlefinger’s ship and cries at what could’ve been. Jon and Ygritte make it to the top of the wall with the others. They collapse at first, weary from the climb but then Jon pulls her up to look across to the other side of the wall. They share a kiss.

Comments: The buildup to the Red Wedding is so much more obvious this time around. I don’t mean that in a negative way, I mean that all the discussions about weddings and alliances didn’t seem quite that important the first time around and it wasn’t immediately obvious who all the players were in the situation. I don’t think I had full grasp of who Roose Bolton was at all. While I do think the show came out of the gates great, it really wasn’t until this season it hit full-on amazing. We’re now trained to know that the biggest moment of the season is always in the penultimate episode but with episode 4’s bit with Dany, this episode’s titular climb, all this “filler” content is phenomenal television. Sansa and Gendry make for quite a pair. They hope for the best and continue to get dealt the worst. Gendry sold off again, and for all intents and purposes, so was Sansa. Her naivete at asking if she could invite her family to the wedding, sidestepping the whole idea they are considered treasonous to the throne and are actively engaged in war with them. The Ramsay thing goes on far too long, as we knew who he was before the season began thanks to casting notices, and while even ignoring that, the few moments we’ve gotten over half the season don’t do much justify the wait. I understand they were ahead of where the books were, but as great a villain as Ramsay is, and as much fun as it is to see Theon getting tortured, it’s not all that compelling otherwise. I once thought Gendry was the key to everything, and it’s clearly a suggestion in these early years. I wonder if he actually will be or if he’ll end up like the Others from Lost, just another throwaway distraction to hold time until the real stuff kicks in. All this to say, this will go down as one of television’s greats, and this is a great episode in and of itself. 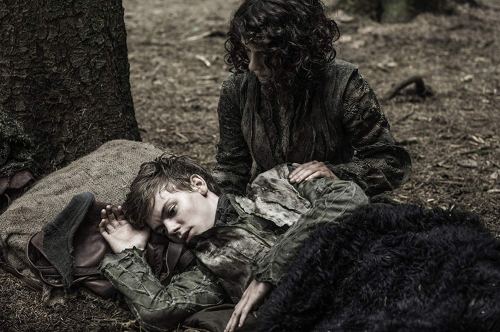 Quotes:
Varys: The Lysa Arryn of Chairs.  (Speaking on how dull and ugly the Iron Throne actually is)

Baelish: Chaos isn’t a pit. Chaos is a ladder. Many who try to climb it fail and never get to try again. The fall breaks them. And some are given a chance to climb. They refuse. They cling to the realm or the gods of love. Illusions. Only the ladder is real. The climb is all there is.

Melisandre: I see a darkness in you and in that darkness, eyes staring back at me. Brown eyes, blue eyes, green eyes. Eyes you’ll shut forever. We will meet again.

Olenna (when questioned about the rumors her grandson Loras is gay): A sword swallower through and through.

Ramsay: If you think this has a happy ending, you haven’t been paying attention.

Foreshadowing: The Boltons becomea much bigger force here. The Roose we’ve known so far was a Robb supporter, but his willingness to deal with Jaime suggests he has other interests. And his son, whom we don’t know is his son yet, shows a particular delight for torture. Melisandre telling Arya they will meet again, I really hope that happens.

Title: While Baelish’s quote connotes a deeper meeting-chaos being a ladder and life is the climb and all that, it’s more specifically about the wildling’s ascent to the top of the wall. Although everyone’s chaos seems to be catching up with them these days.

Deaths: Joffrey uses Ros for target practice, though we only see that after the fact.