Game of Thrones – Episode 3.4 “And Now His Watch is Ended”

Synopsis: A defeated Jaime sits atop his horse, his severed hand hanging around his neck. Jaime falls into the mud and struggles to get up. He asks for water and is given urine in return. While he manages to grab a sword, he is unable to fend Bolton’s men off and is beaten and kicked for good measure. Tyrion goes to see Varys, and he asks if he has any proof that it was Cersei who paid the man to kill him. Varys says he has no proof, only whispers. As he tries to open a large crate, Varys tells Tyrion the story of how he became a eunuch and the sorceror that tortured him. Tyrion wants more information on his attempted murder, but Varys explains to him that he needs to have patience. Then he opens the crate to reveal the sorcerer. At Craster’s keep, the men of the Night’s Watch are helping around the camp, but Rast wants to leave. Grenn and the others say they will leave when the Lord Commander tell them to. Sam visits Gilly and her newborn. Sam asks if he has a name, but Gilly says she hasn’t named him and why bother given his fate. She returns Sam’s trinket that he gave her and asks if he can help her escape.

In a dream, Jojen and Bran chase the three-eyed raven, and Bran climbs a tree to go after him. At the top, with the raven within reach, Bran sees Catelyn, who yells at him for climbing and shoves him out of the tree. Bran wakes up. Varys visits Ros and she updates him on Podrick’s prowess, as well as Littlefingers movements. It seems Baelish has booked a boat and secured bedding for someone other than himself. Sansa perhaps? At the Sept of Baelor, Joffrey walks Margaery around showing her every tortuous site. Cersei and Olenna walk through as well discussing the pending wedding. Cersei is distrustful of Olenna. Margaery convinces Joffrey to engage more with the common people and outside the sept they walk out with the people crying for Margaery like she’s a Kardashian. Theon and totally not Ramsay ride to meet up with Yara. Theon follows the man through the woods, and a tunnel into a compound. Theon laments his choices and he admits that he killed orphan boys to pass off as Bran and Rickon. They make their way inside and Greyjoy is aghast that he’s back in the torture room he escaped from. Totally not Ramsay says Theon killed the other men and Theon is strapped back to the post. At camp that night, Brienne urges Jaime to eat. He needs his strength for revenge. Brienne snaps at him for whining like a bitch. Jaime eats. Brienne asks him why he lied to save her, but he remains silent. Cersei asks Tywin about Jaime. He says he’s doing whatever he can to get him back. Cersei dumps her daddy issues out on Tywin, and questions why he never put any faith in her. She tells him that the Tyrells are a problem. Varys visits Lady Olenna and he enlists her as an ally against Baelish. 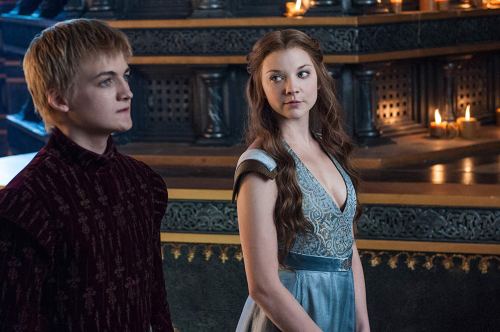 Margaery continues to befriend Sansa and says she wants Sansa to marry her brother, Loras. Sansa is totally on board with this plan. Back at Craster’s keep, Jeor on the others bury one of their men. Rast continues to urge an uprising, as Craster continues to give them scraps while feasting. And then things go apeshit. Karl, a more rebellious Night’s Watch man murders Craster. When Jeor pulls his sword, Rast stabs him through the heart. Chaos erupts. Sam grabs Gilly and the baby and they take off in the confusion.

The Brotherhood without Banners take their guests-Arya, Gendry and the Hound- to a cave to meet their leader, Beric Dondarrion. The Hound knows Beric and calls him a deserter. Beric calls Clegane a murderer for crimes that his brother is known for. The Hound swears he’s not a murderer but Arya jumps in and brings up Mycah, her friend that the Hound killed. Beric calls for a trial by combat and says he will fight the Hound himself. Dany and the others meet with Kraznys to close the deal. She hands over one of her dragons and he gives her the whip that control the Unsullied. She startles everyone when she begins to speak their language, meaning she’s understood Kraznys the whole time. While Kraznys struggles to control the dragon, Dany frees the Unsullied and tells them to murder their masters if they will fight for her. Kraznys objects and Dany commands her dragon to dracarys hot fire all over him and Kraznys is ashes. Dany asks the Unsullied if they will fight for her as free men and they march out with her.

Comments: The first A-plus episode of the season. Every single moment is perfect, from the quiet face-off between Tywin and Cersei, to the enormous mess at Crasters, to Dany’s triumph at the end. Dany’s storyline throughout the run of the show seems to follow a simple pattern-she is underestimated, she triumphs. It happens little by little throughout the first few seasons, and it will certainly happen again, but this moment is the first time where her transformation from the naïve waif under her brother’s thumb we met in the first episode to the HBIC is complete. And I am here for it. Two other redemption arcs begin as Theon’s crimes catch up to him and he finally admits his culpability just as he’s recaptured. And Jaime’s slow climb from villain to antihero moves forward as everything that gave him his worth-his swordfighting hand-dangles from his neck. While they make the unlikeliest of pairings the relationship between Jaime and Brienne deepens and I wonder if we’ll get any more from them before the series ends. While Tywin shames Cersei for not being as smart as she thinks she is, she’s at least smart enough to see the threat of the Tyrells that he seems intent on overlooking. The battle at Craster’s shifts that story into different directions as Sam and Gilly are on their own, the elder Mormont is gone, and sides will have to be drawn between Rast and the others. With George R.R. Martin’s affinity for Tolkien and Samwell sharing a name with one of the Lord of the Rings trilogy’s major characters, his importance probably can’t be underestimated. And, as always, everything Olenna says is pure gold.

Quotes:
Theon: My real father lost his head at King’s Landing. I made a choice. And I chose wrong.

Olenna: It almost feels as if you’re about to arrive at the point.

Varys: He would see this country burn if he could be king of the ashes. (re: Littlefinger)

Foreshadowing: The Hound’s reference that Arya might be the bravest one there certainly points to where she’s going as a character. Olenna and Varys scheming together. Now what could they be cooking up?