Synopsis: At Riverrun and the funeral for Hoster Tully, we are introduced, somewhat, to his son and Catelyn’s brother, Edmure, as he tries to light the coffin boat aflame with a bow and arrow. He fails three times before his uncle Brynden takes over and nails it in one shot. Without words, we’ve already got a pretty clear idea of who these guys are. Later, Robb berates Edmure for failing him in the battle against Tywin. Tywin sits at the head of the small council meeting as Varys, Baelish, Pycelle and Tyron join him. Cersei arrives and symbolically and literally moves her chair to Tywin’s right side. Tyrion drags his to the other end of the table. Tywin asks about Jaime, but no one has heard word. He orders Baelish to go to the Vale and marry Lysa Aryn, thus turning Robb’s aunt against him. Tyrion questions Littlefinger’s absence being a challenge for the royal wedding and Tywin counters by naming Tyrion Baelish’s replacement as Master of Coin. Bolton’s men ride with their captives, Brienne and Jaime, who continue to bicker like an old married couple. Gendry makes new armor for Thoros, while Arya questions his helping their captors. Thoros says they aren’t his captives, but his guests. Hot Pie makes a bread for Arya and Gendry and bids them adieu. He’s staying behind.

Catelyn and Brynden “the Blackfish” reconnect. They mourn her father, and Cat laments she will never see Bran and Rickon again, but Brynden assures her that they are still alive. He urges her to remain strong. Talisa tends to some Lannister captives one of whom is totally not Tommen. North of the wall, Snow, Ygritte, and the Wildling crew come upon a horrific display of dead horse parts in a spiral pattern in the snow. Jon notes there’s no men, and Mance implies they’re Wights now. Jeor and his crew return to Craster’s, seeking safety. Craster feeds them and as they sit by a fire, they hear the sounds of one Craster’s daughters giving in labor. Craster makes fun of Samwell and he takes leave and discovers the woman giving birth. It’s Gilly, and the baby is a boy. Everyone knows his fate. The young man who is totally not Ramsay frees Theon, gives him a horse and sets him free to meet his sister. At Dragonstone, Melisandre says goodbye to Stannis. She is going to where the fires tell her. She swears she will return. He wants to make another “son,” but she says he is too weak, but there are others who have his blood. Dany walks with Jorah and Selmy along the Walk of Punishment, rows of crucified men. Jorah and Selmy recommend that she should leave without the Unsullied. She should have an army of men willing to die because they believe in her not because she bought them. Dany tells Kraznys that she wants all the Unsullied and those training to be Unsullied. Kraznys, through his interpreter Missandei, says that she can’t afford them. Dany offers to give her one of her dragons. Jorah and Selmy advise against this plan, but Dany is adamant. While Kraznys continues to insult Dany while Missandei translates around it. Dany also wants Missandei as part of the deal. 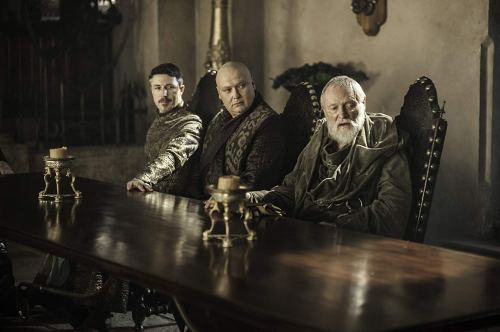 At Baelish’s brothel, Tyrion gets the accounting books from Littlefinger. When he learns Podrick is a virgin, Tyrion repays him for saving his life by giving him three whores. While studying the books, Tyrion learns that the crown is in debt to the Lannisters by quite a bit, as well as the Iron Bank of Braavos. When Podrick returns with Tyrion’s money, he and Bronn are shocked to learn he slept with the women, but they gave him the money because they enjoyed themselves so much. The men want details. Theon is chased in a field by a group of men with bows and arrows. Theon is knocked off his horse, beaten by the men, and almost raped until he is once again rescued by the young man who is totally not Ramsay.

Jaime and Brienne are captive and as Jaime predicted, Bolton’s men come to rape Brienne. She fights them off but they cart her away and as Jaime listens, he talks Locke, their leader into leaving her be so that there will be a reward for not violating her. Jaime talks his way out of the chains, but in doing so, Locke punishes him by chopping off his hand.

Comments: Right off the bat, the episode wins. A funeral scene, without words, played for laughs, while introducing two new characters. Brilliant. Moments later, another scene played without words at the small council. Also comically. For a show with continuous murder and two attempted rapes in this episode alone, the lighter moments really help to balance it. While the first two episodes established where the characters are, this one pushes them in different directions. Jaime’s road to redemption begins right with that shock of an ending as the same hand that shoved Bran out the window in the first episode is left lying by itself on the slab in front of Jaime. Dany’s side adventure, and really her storyline for the first five years feel like side adventures, gains momentum as she takes steps to get the Unsullied, but more importantly she takes steps to establish herself as a true leader. The introduction of the Tully’s is seamless, but their importance is overplayed as we will soon learn. I do think Theon’s storyline is a bit dragged out. This could’ve easily been truncated with the previous episode and the next for a more cohesive storyline versus just having a few bits peppered here and there. It’s the beginning of the season though, and things are still in the building stage.

Quotes:
Brienne (to Jaime): Maybe you were as good as people said…once. Or maybe people just love to overpraise a famous name.

Dany: All men must die. But we are not men.

Tyrion: I’m quite good at spending money, but a lifetime of outrageous wealth hasn’t taught me much about managing it.

Foreshadowing: Selmy and Jorah underestimate Dany, though it does feel like she’s got a plan going. Her affinity for slaves will not be limited to just Astapor.

Title: The Walk of Punishment, as explained by Selmy is in Astapor where crucified slaves are left as a warning to others. But really I think might be a nod to Jaime’s story and his punishment for his misdeeds we’ve seen up till now.

Deaths: The men who come for Theon are butchered by totally not Ramsay.