Game of Thrones – Episode 2.8 “The Prince of Winterfell”

Synopsis: Yara joins Theon in Winterfell but she is still not impressed by him. She calls him weak and stupid and says that she has come to take him back to Balon. Ygritte brings her captor, Jon Snow, to her people and when they want to kill him, she convinces them otherwise. Snow is surprised to see that Qhorin has also been captured. Robb tells Talisa about his deal to be married to a daughter of Walder Frey. Before they can finish, they are given word that Jaime Lannister has escaped. Robb confronts his mother and she admits she let Jaime go in exchange for the girls. Robb has his men guard Catelyn, essentially placing her on tent arrest. Jaime and Brienne continue on their journey, leaving their horses behind and instead taking a small boat. Jaime taunts her but she doesn’t fall for it. As Arya listens, Kevan gives Tywin an update on Stannis’ approach on King’s Landing. Tywin thinks they should attack Robb while he’s distracted with Winterfell, and has his team prepare to leave at nightfall. He leaves Harrenhal to the Mountain and Arya in his service. Arya searches for Jaqen, but can’t find him before Tywin leaves. Qhorin and Jon are marched along with the Wildlings to their leader, Mance Rayder.  Qhorin hints that Jon can get intel from Mance if he does what needs to be done. Then he knocks Jon down. Tyrion and Bronn work on King’s Landing’s defense by studying prior battles with Varys.

Sam, Grenn and the other men of the Night’s Watch are setting up camp. The others assume Jon and Qhorin are dead, but Samwell believes they are still alive. While digging Grenn finds a stone with markings of the first men. Underneath, they discover a collection of daggers made of dragonglass. When Arya finds Jaqen, he asks for the last name of the person he will kill for her. She names him. He demands she unname him and she says she will if he helps her and friends escape. Tyrion and Cersei have dinner and talk about the pending battle. Joffrey wants to fight, which Tyrion supports, but Cersei does not want him to join the battle. She tells Tyrion she has his whore and that whatever happens to Joffrey will happen to her. Tyrion demands to see her and Cersei presents Ros. Tyrion plays along and tells Ros to be brave and that he will free her. Then he threatens Cersei. Tyrion then runs to his room to make sure Shae is safe.

Roose Bolton tells Robb that his bastard in a few days out of Winterfell. Robb wants to send along a message that any of Theon’s men that want to surrender and retreat will not be harmed, anyone save for Theon. Talisa comes to Robb’s tent and he vents to her. They share their childhood traumas as they continue to fall for each other. Then the clothes come off and uglies are bumped. Arya, Hot Pie and Gendrey can’t find Jaqen but as they walk out of Harrenhal they discover all the guards have been killed, paving an easy path for escape. On Stannis’ ship, Davos says they will reach King’s Landing within a day.  As they talk about Davos’ past, Stannis says he wants Davos to be his hand when he becomes king. Tyrion, Joffrey and Varys talk about the pending war. Joffrey talks big about joining the effort, but the others aren’t impressed. After, Tyrion and Varys question each other’s motives. Tyrion says he likes being the hand and wants to continue. Varys says he’s heard that Daenerys is still alive and has three dragons. She is not their most immediate threat right now, Tyrion says. In Qarth, Jorah tells Dany he’s found a ship, but she won’t leave without her dragons. Dany asks Jorah to take her to the House of the Undying where the warlock says her dragons are. At Winterfell, Luwin catches Osha stealing bread and learns that she doubled back and is hiding in the castle with Hodor, Bran and Rickon. The bodies burned were imposters.

Comments: Probably the first truly slow episode of the show as not much progress is made and the focus on too many territories doesn’t let any of them gain any momentum. I’m glad they didn’t drag out the obvious fakeout with the boys too long, but that tacked on scene as well as Dany’s didn’t feel necessary at all for the episode. After sharing a somewhat sweet moment in the last episode, Tyrion and Cersei are back hurling threats and trying to destroy the other. Either way, they are always engaging to watch. Theon’s quest for respect sees another setback. Given what we’ve seen even years after this, it’s to wonder if he will ever make a comeback. Even in one minor scene Joffrey makes me wince. While it helps knowing his fate to make his general skeeviness more palatable, I still wish those moments would hurry along. Tywin and Arya made for an interesting pairing, a shame it’s over so quickly.

Memorable Moments: None really, not suggesting there’s anything bad in this episode but it’s the Game of Thrones equivalent to a bottle episode, saving budget for the next episode so a lot of talking in this one.

Quotes:
Yara (to Theon): You’re a great warrior. I saw the bodies above your gates. Which one gave you the tougher fight, the cripple or the six year old?

Jaime (to Brienne): Has anyone ever told you you’re as boring as you are ugly?

Arya: Where were you?
Jaqen: A man has patrol duty.

Tyrion: I will hurt you for this. A day will come when you think you are safe and happy and your joy will turn to ash in your mouth. And you will know the debt is paid. 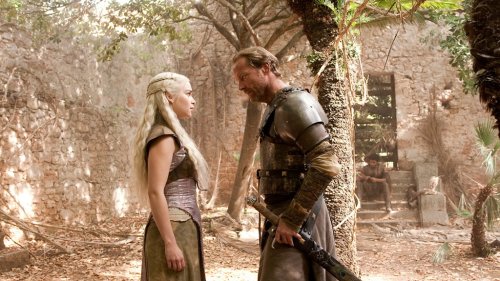 Deaths: All the guards at Harrenhal.