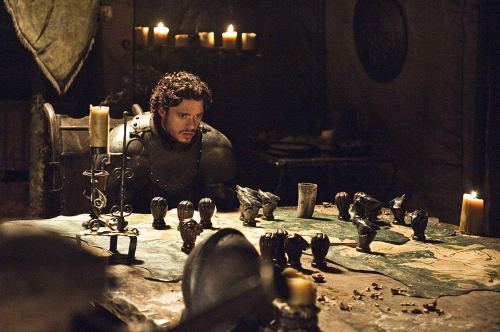 Synopsis: Maester Luwin faces a siege on Winterfell but gets a raven out before. Theon wakes Bran up to say that he’s taken the castle. Theon tells Bran he’s going to call the city to where Bran can yield the castle but Bran says he’s not going to. “Did you hate us the whole time?” Bran asks. With the townsfolk gathered, Bran reluctantly concedes but the support for Theon is less than enthusiastic. Rodrik is captured and spits in Theon’s face, and Theon wants to throw him in a cell, but Dagmer says he has to put him death for the slight. Theon takes Rodrik’s head. Arya continues serving Tywin, but is nervous when Baelish arrives and she must work in his presence. Baelish reveals that Margaery could be married into Lannisters to bring Tyrells to their side. Baelish does get wind of Arya’s presence but does not blow her cover. Jon joins Qhorin on his quest to infiltrate the Wildlings. Their first camp Jon hesitates to kill a Wildling woman, Ygritte and convinces the others to question her. When they leave Jon to kill her, he hesitates and she runs off. He catches up to her, but he’s lost his friends and the sun is going down. Myrcella is shipped off to Dorne as Cersei and Tyrion look on. Cersei vows to find someone Tyrion loves and destroy her. Walking through town, Joffrey is pelted and a riot soon erupts. The king’s supporters are attacked, some dismembered before the Hound and the kingsguard fight them off. Sansa is chased down as a group of men try to rape her, but the Hound is able to rescue her and kill off the men before it happens. Tyrion yells at Joffrey for being a weak king.

Dany and Xaro meet with the Spice King where she asks for help in the form of ships for her conquest to cross the narrow sea, but he denies helping her. Back at Harrenhal, Arya sees a note about Robb Stark’s plans on Tywin’s desk and is able to distract him long enough to sneak it out. Tywin recognizes her maturity and intelligence, but her cunning escapes him. Amory Lorch catches Arya and grabs the note, but she finds Jaqen before he makes it to Tywin to reveal. As Amory opens the door to Tywin’s chamber, he falls over dead. At Robb’s camp, he meets up again with Talisa and they continue to flirt before they are interrupted by the return of Catelyn with Brienne in tow. Catelyn can tell Robb is smitten, but reminds him of their deal with the Freys. Roose Bolton arrives with the news from Winterfell. Jon walks with Ygritte, now his captive as they decide to camp out for the night. They huddle up together to stay warm. Robb and Catelyn are frustrated at the news of Theon’s rebellion. They agree to let Roose’s men retake Winterfell so they can stay in the field.

Osha asks Theon for her freedom in exchange for a little naked time. Osha sneaks out of Theon’s and meets up with Hodor, Bran, Rick, Shaggy Dog, and Summer before escaping. Sansa confesses to Shae that she hates Joffrey. Shae warns her to be careful who she says that to. Dany and Xaro return to her quarters to find her men and handmaidens killed and her dragons missing.

Comments: As far as meetcutes go, Jon and Ygritte’s is the most aggressive. Their forced warmth scenario is a bit pointed, but they’ve got good chemistry so let’s go with it. And impressive with how quickly another new character is able to make such a strong first impression. With so many Ladies with a capital L and victims of the feminine gender, it’s cool to get another warrior like Brienne. After the relative slowness of the previous episode there’s a lot of movement here. The Starks have left Winterfell, Robb begins fighting a war on two fronts, Dany’s mission gets arguably its biggest setback, Baelish is at Harrenhal, and even status quo moments like Tywin and Arya are filled with tension. Theon’s rebellion, despite its violence is played mostly for comic relief with Bran’s shrug and yawn when he announces he’s taken the castle. The death of Rodrik shifts that into more serious territory. I never gave much thought to Roose Bolton before and kind of forgot how ingrained he was with the Starks before his betrayal. Tyrion’s contempt of Joffrey and his complete lack of fear at his rule are always welcome, even necessary to make his shitty ruling all the more palatable.

Memorable Moments: Another cliffhanger ending, with Dany’s dragons missing and so many Dothraki dead.

Quotes:
Tyrion: We’ve had vicious kings, and we’ve had idiot kings, but I don’t think we’ve ever been cursed with a vicious idiot for a king.

Daenerys: Where are my dragons?! 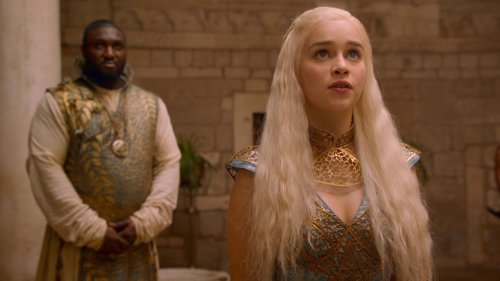 Foreshadowing: Another reminder of the deal with the Freys, the importance of which will change the course of the show. Roose making mention of his bastard is the first hint at another one of the villains to come.

Title: Another case of the title being pulled from a quote from a different episode. It’s something of a prayer, or more akin to simply saying “Amen,” but was most recently heard in the previous episode as Brienne and Catelyn pledged their loyalty to each other.

Deaths: Rodrik is beheaded by Theon, a few members of the King’s entourage in the riot, including the High Septon, Amory Lorch by Jaqen (poison dart) per Arya’s request, one of Theon’s guards has his throat slit by Osha, Irri and numerous Dothraki.