Game of Thrones – Episode 2.5 “The Ghost of Harrenhal”

Synopsis: Renly and Catelyn broker a deal between his camp and Robb’s where Renly will take the throne and leave the north to Robb. It all sounds great, but before they can party, Melissandres smoke monster son blows into the tent and stabs Renly through the heart. Horrified, Brienne and Catelyn take off before being blamed for his murder. Loras, Margaery and Baelish mourn Renly, and vow vengeance against Stannis whom they know was responsible. Loras leaves and Margaery tells Baelish she doesn’t merely want to be A queen she wants to be THE queen. Tyrion shares the news of Renly’s demise to Cersei. Later, Tyrion meets with Lancel who reveals that Cersei has commissioned her men to make wildfire to take on Stannis’ army. Stannis and Davos regroup. Renly’s camp has now flocked to Stannis’ side save for the Tyrell’s. Davos tells Stannis he’s uncomfortable with Melissandre. Tyrion and Bronn take a walk through King’s Landing where Tyrion fears the pending threat of Stannis. Theon meets his crew who aren’t super jazzed about following him. Yara taunts her brother.

At Harrenhal, Arya listens to Tywin in his council meeting as they talk about the battles that Robb has been winning. Tywin figures out Arya is a northerner and questions her on the north’s thoughts on Robb. Arya says that the stories are he rides into battle on the back of his wolf and can’t be killed. Tywin asks if she believes, but she wryly responds that anyone can be killed. Arya meets with Jaqen and he says that because she saved him and his friends, he will pay her back three deaths, any three names she says he will kill. She names the Tickler, the one that has been torturing everyone. North of the wall, the men of the Night’s Watch trudge through the snow making their way deeper into Wildling territory. King of exposition Samwell talks about the history of the first men. Tyrion meets with the Pyromancer, one of the men making wildfire for Cersei. He shows them his full stash, nearly eight thousand jars. Tyrion is impressed and says that he will no longer make wildfire for Cersei. He will make it for Tyrion.

In Qarth, Dany trains her dragons as she gets cleaned up. She urges her servants to get more info from the men of Qarth. At a party, Dany wears a new dress she was given by Xaro, her new sponsor. Creepy bald dude(s) Pyat Pree introduces himself to Dany and invites her to the House of the Undying. A masked woman warns Jorah to protect Dany. On the road, Brienne and Catelyn fail the Bechdel test by talking mostly about Stannis and Renly. Still, the women bond and Brienne vows her service to Catelyn. At Winterfell, Bran continues to lead despite Rickon’s ADD kicking in. Rodrik interrupts to tell them they are under attack. Believing it to be Lannister men, Bran offers all the men he needs. Afterward, Osha asks Bran if he’s had any more dreams and he says he dreamt about Winterfell being flooded and Ser Rodrik and others were drowned. The men of the Night’s Watch plan to send a small group of men to infiltrate the Wildling camps to thin out their numbers and find their leader, Mance Rayder. Samwell offers to take Snow’s steward duties while he’s gone. Dany tells Xaro that she is going to take the iron throne. Xaro is impressed enough to propose, and offer half his riches to support Dany’s conquest. He tells her of Robert’s death. She discusses the matter with Jorah, but he is against it. He says he wants to see her on the throne, he believes in her claim, and in her ability to lead, but he doesn’t want her to get the throne with Xaro’s money. Jorah suggest she gets one ship to take their crew to Westeros to continue their mission. She agrees. Gendry is put to work crafting swords, and Arya shares advice on the proper way to fight. They are interrupted by a commotion and they run to see the body of the dead body of the Tickler. Jaqen and Arya catch each other’s eyes. She knows what’s up.

Comments: It was nice to see the pyromancer, played by a nearly unrecognizable Roy Dotrice. He’s known for Amadeus and The Cutting Edge, and he does a great job of doing the audiobooks for Game of Thrones (I think he’s been recognized for the vast number of voices he does) but I remember him most from Picket Fences, where he played Father Barrett. He passed away a couple years ago but these episodes were his final acting roles. As with most episodes, the Tyrion and Cersei scenes are a highlight even ones where little happens. Margaery’s becoming a more interesting character, especially with her quest for power, and despite a getup that makes her look like a fruit roll up. By kicking off the episode with Renly’s abrupt demise, once again Thrones shows it’s not fucking around when it comes to these plots. Normally, a big death has a little build up, it might even cap the episode but to be disregarded in the first few moments and to send Brienne and Catelyn off together was a surprising turn. Arya’s moment talking to Gendry about how to sword fight is a sad reminder of how recently she was merely taking lessons in secret. 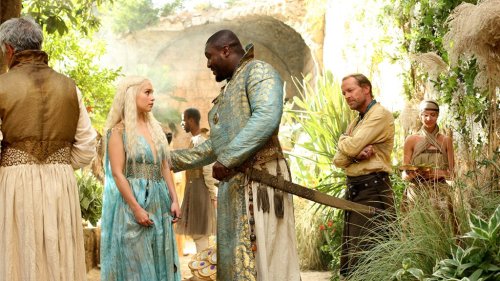 Memorable Moments: Renly’s death for sure. One of the few teams the show launches into a gut punch right at the beginning of the episode.

Quotes:
Margaery: I want to be THE queen.

Arya: Anyone can be killed.

Tyrion: Schemes and plots are the same thing.

Tyrion: Even torturing you is boring.

Foreshadowing: Arya commenting that anyone can be killed is more true than at first suggested. The contents of the room that could destroy King’s Landing eventually do become an issue for the town. Bran’s dream about a flood coming to Winterfell and taking out Rodrik. Samwell’s comment about taking over steward duties connotes his importance in uncovering information.

Title: In reference to Jaqen as he ninjas his way through Harrenhal.

Deaths: Renly by Stannis and Melissandre’s smoke monster baby. The Tickler by Jaqen via his pact with Arya.