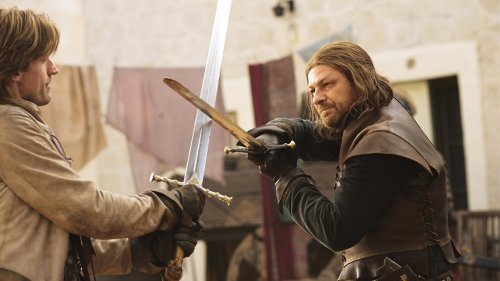 Synopsis: Ned questions Ser Hugh’s death to Barristen Selmy. The King wants another joust so this time we get introduced to Loras Tyerll who challenges the Mountain. When the Mountain loses the joust he pulls out his sword, but the Hound protects Loras. Catelyn rides with her prisoner Tyrion. Bran is upset that Catelyn left him. Varys warns Ned that the King is in danger. Arya finds her way into the dungeons with dragon skulls. She overhears Varys and Illyrio having a secret discussion but isn’t quite sure what they mean, other than a threat against Ned. Baelish and Varys have a passive aggressive face off, both noting they are watching the other one. Yoren makes his way to King’s Landing and tells Ned that Catelyn has the imp.

Catelyn has an uneasy reunion with her sister Lysa, who is none too thrilled that a Lannister is in her home. When Robert learns that Dany is pregnant he wants her and her brother killed, but Ned refuses to accept that course and resigns as hand of the king. Renly and Loras meet in private where they have a little naked fun time. Robert and Cersei discuss how their tenuous marriage is what’s holding the kingdom together. Cersei finally asks about Lyanna. Baelish takes Ned to meet another bastard of Robert’s, tracking the same mission as Jon Arryn. As he leaves with Jorah, Jaime and his soldiers cut them off. Blood is spilled, Ned and Jaime cross swords before one of Jaime’s men interrupts, stabbing Ned in the leg. 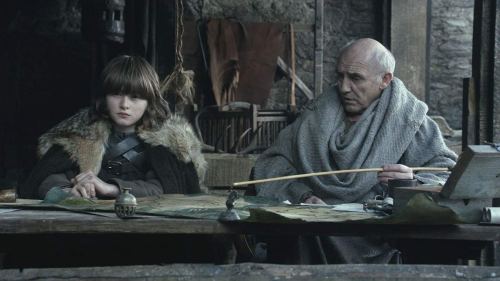 Comments: New areas of import – the Vale is introduced and crazy Lysa, along with ten-year-old Robin suckling her teat. The relationship between Renly and Loras shows how a show can be both progressive and old-fashioned. From the capture of Tyrion to the death of Jory, the show doesn’t waste any time with needless plot. Even a middle episode has a lot of movement and focus in the bigger picture. While the show sets up additional mysteries and side-stories, nothing ever feels like Lost-level of spinning wheels to get to a finale they have no connection to. Everything here feels here important, and will have importance later on.

Memorable Moments: Ned and Jaime’s sword fight which unfortunately ended in something of a draw. Cersei and Robert’s meeting also displays her character’s coldness well.

Quotes:
Robert: I thought being king meant I could do whatever I wanted.

Bronn: Give me ten good men and some climbing spikes, I’ll impregnate the bitch (referring to the Vale)

Cersei: It doesn’t make me feel anything

Cersei: I’m sorry your marriage to Ned Stark didn’t work out. (to Robert after Ned resigns his post)

Foreshadowing: Arya is mistaken for a boy several times, once by Yoren which will help her later, but also hints at her future, both immediate and long-term.

Title: Spoken by Varys in reference to the Houses of Lannister (Lion) and Stark (Wolf) and their battles with each other.

Deaths: Jory gets eye-stabbed by Jaime.