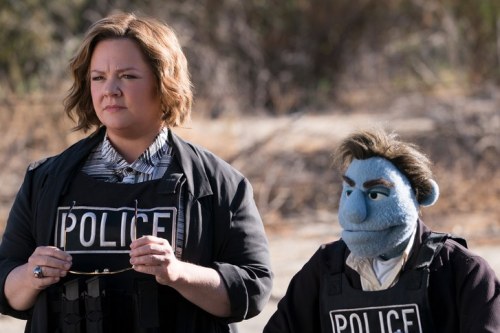 An interesting concept-a dark comedy in a world where puppets (more accurately, Muppets, or Sesame Street-esque creatures, thanks to director Brian Henson, yes, son of) live alongside humans-is wasted in the not-nearly-as-funny-as-it-should-be Happytime Murders. The film seems to think that a Muppet saying “fuck” is enough to generate laughs, which it isn’t after the first two or three times. Melissa McCarthy does her able best as a cop working with her former puppet partner investigating a series of murders to the actors who once worked on a 90s TV show, but she can’t escape a script lacking in, amongst other things, effort.

Phil Philips (voiced by Bill Barretta) is a disgraced cop who left the force after accidentally killing a bystander. Subsequently, puppets are no longer allowed to be cops, and are mostly treated as second-class citizens. After two actors of the Happytime show are killed, including Phil’s brother, he reunites with Detective Connie Edwards (McCarthy) to get to the bottom of the mystery. The mystery takes them to drug dens, porn shops, and strip clubs, anywhere they can mine humor from merely the idea of a puppet in these situations, without doing anything creatively to actually explore them. It’s a shame, because the subjugation of puppets is an interesting angle that isn’t really addressed beyond the surface of it, and is something that could’ve given the film a little more weight or depth.

The film never figured out the proper tone. It takes some things quite seriously, the actors do a good job of playing it straight, and other things it plays so broadly it doesn’t make any sense, which is surprisingly egregious for a film that sells you on a world of junkie puppets, and smoking detectives made of felt. The mystery isn’t that mysterious. The comedy isn’t that comedic. And the drama…you get it. It wastes the talents of its entire cast, including and especially McCarthy who can usually shine in weak films, but also Elizabeth Banks, Maya Rudolph as Phil’s brassy secretary, and Joel McHale as an angsty police detective.

Murders amounts to a good concept and seemingly a really rough first draft that was rushed into a film without much of an afterthought. Disappointing on every level, but mostly just completely uninteresting.