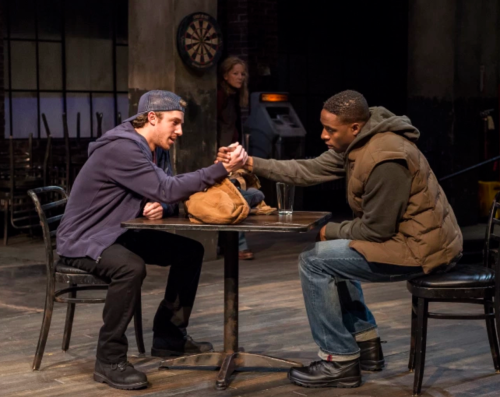 It’s not that common in live theater, at least from what I frequent, to get a show that’s set in the modern age. Mostly, there’s an endless stream of classics: Shakespearean works, Tolstoy, up to Eugene O’Neill, Edward Albee, and the like. As well as many of these works are, I often find it hard to relate, even if I can appreciate the storytelling, performances, and themes. But it’s those “modern” works that I tend to gravitate towards even if there’s no direct correlation between myself and the characters on stage. Lynn Nottage’s “Sweat” is one such play.

Set in 2000 and 2008, the story follows the families and friends of a factory town, who spend most of their time at a local watering hole. Career workers Tracey (Mary Mara) and Cynthia (Portia) have sons in the business who are best friends, though we see right up front that the 2008 versions of Chris (Grantham Coleman) and Jason (Will Hochman) are estranged, and just getting out of prison. As Cynthia and Tracey vie for a supervisor position, and Cynthia deals with her off-again, drug-addled husband (John Earl Jelks), the factory and its workers are maneuvering through changes, both technical and geographical. The girls, along with their drunken pal Jessie (Amy Pietz) vent and wallow at the bar run by former factory worker Stan (Michael O’Keefe) and his worker, Oscar (Peter Mendoza).

The story weaves seamlessly through time periods, utilizing technology to establish the proper time frame. It’s hardly necessary, as the performances and writing are so strong that it’s obvious when things are. Coleman and Hochman especially have a way of just appearing older, more grizzled than their year 2000 counterparts, although Hochman does have the benefit of makeup.

Sweat captures a political moment, by exploring a bigger issue such as NAFTA, through the circumstances affecting the characters here. It’s not an overtly political work, merely uses the legislation and the fallout from it as a means to tell a harrowing, sad, and ultimately affecting piece of work. All of the performances are solid, most notably Hochman, Portia, Coleman and Mara, who all have moments of extremes to dive into. Mendoza, who has little to do in the first act shines in the second.

Nottage understandably won her second Pulitzer for Sweat. It encapsulates the best aspects of theater-solidly entertaining, dramatic without being too heavy, and full of excellent writing and performances that stick with you long after the curtain falls (though full disclosure, there was no curtain at the Mark Taper, where the play is running now).