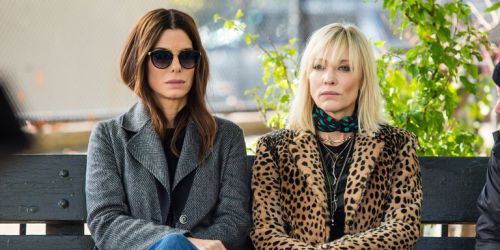 I really wish when they make these gender-swapped remakes of movies, they would at least make them good to shut up the sexist whiners who think the female version is traipsing over some sacred ground. But like Ghostbusters before it, Ocean’s 8 is a collection of great actresses doing mediocre things in a movie completely unworthy of them, based on a previous movie that didn’t really need a rehash.

Here, Sandra Bullock picks up the running-a-scam reins from the original (or rather recent remake) Ocean’s franchise as Debbie Ocean, sister to Danny (George Clooney) who has died some time since the last of that series. Debbie, fresh out of prison looks up her former partner in crime Lou (Cate Blanchett, looking stunning) and they assemble a team in order to rob the Met Gala of a prized necklace, worn safely on the neck of a young starlet (Anne Hathaway, who is a lot of fun). The team (Helena Bonham Carter, Rihanna, Mindy Kaling, Awkwafina, Sarah Paulson) are shown assembling, and then pulling off the heist with very little conflict. Like the previous Oceans before it (and why none of them really worked after the first), the biggest plot points are based solely on withholding info from the audience and then surprising them later, which mostly fails.

Bullock is great at least, certainly a worthy heir to the Ocean’s throne and capable of carrying a movie such as this, but amidst the dry looks and her quickly luring people onto her side, there’s really not much at all to this movie. Blanchett and the others are completely wasted. Early on, there’s a quick scene with Mindy Kaling’s character learning about online dating. It’s completely pointless and I’m surprised it wasn’t cut, but it’s really shows what this movie could’ve been helped by – more scenes with the women interacting as friends and crime-mates. That the heist itself is relatively conflict free makes this entire film just seem like one big puff of smoke, dissipating as quickly as it appeared.

Points for effort, and for everyone at least looking like they were having fun. And there’s at least a few shots from director Gary Ross that are nice to look at.