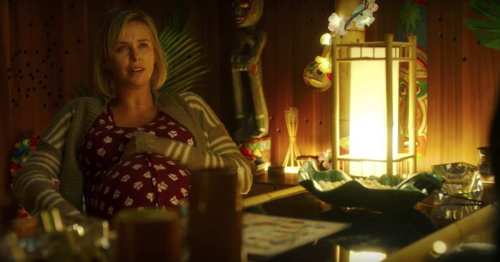 The combination of director Jason Reitman, screenwriter Diablo Cody, and can-do-anything actress Charlize Theron is a potent one. Their last effort, Young Adult, was a favorite of mine the year it came out, and the equally adept Tully is also a solid achievement (Reitman and Cody’s first hit Juno remains their best). Tully moves quick with sharp dialogue, decent pacing, and great performances.

Theron is Marlo, a put-upon mom pregnant with her third child. Her second is potentially-on-the-spectrum handful and her tired-eyed husband (Ron Livingston) isn’t always the most help. Marlo’s new agey brother (Mark Duplass) gives her the gift of a night nanny named Tully (Mackenzie Davis) and she breezes into Marlo’s life like a manic-pixie-wet nurse savior.

Theron captures the post-partem angst particularly well and the film doesn’t lack subtlety in its weary portrayal of caring for a newborn. As the charming nanny, Davis is breezy and light and her chemistry with Theron and their complex relationship is the core of the film. As the movie shifts into different gears it’s a little uncomfortable, often frustrating, but ultimately successful piece of entertainment. It’s a fun and thoughtful film that knows well enough to get out quickly before wearing out its welcome.

Tully is fun and surprising, and Theron is always dazzling, perfectly capturing Marlo’s wit and bone-dry sense of humor. Davis has a potential career in picking up Zoey Deschanel’s leftovers. And Reitman and Cody continue their winning streak.