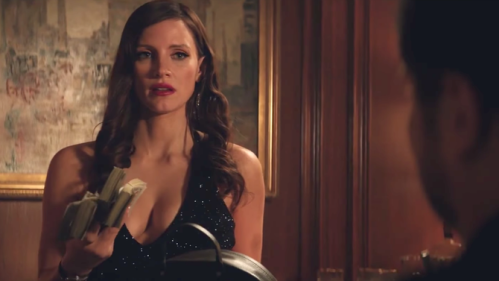 Aaron Sorkin is brilliant, one of my favorite writers, but he has patterns and traps he sometimes falls into: rat-a-tat dialogue that is sometimes more clever than it should be, a dogged everyman as his central character, unrelenting idealism. It’s why, despite some fantastic moments, The Newsroom was a bit of a failure. And it’s why, despite some missteps, Molly’s Game is a triumph. Based on the book/true story of Molly Bloom, an Olympic skier who sidestepped her future plans to become the host of an exclusive high-high-stakes poker game, raking in millions on both coasts until her eventual arrest. The film jumps around between the case and Molly’s retelling of what lead to her eventual downfall, a bit too similar in structure to The Social Network (which Sorkin wrote), but it’s still a funny, surprising and interesting look at the underground poker world.

Jessica Chastain is Molly, the smart, driven, and vigilant central figure channeling her daddy issues into dollars. Idris Elba is her gifted and articulate attorney, Charlie Jaffey. Really, the film lives or dies on their connection and it’s powerful. Sorkin’s eschews his usual dialogue tropes-walk and talks and a rhythmic back and forth patter, for more eloquent but honest conversations. It’s a smart script but I was surprised by how Un-Sorkinesque it was, despite being obviously Sorkin (I know that doesn’t make sense, but go with it). Chastain ably carries the entire film exuding a grace and strength that Sorkin usually reserves for the men. Sorkin has always had a bit of trouble with women, giving them character quirks like messing up at their job, or being ignorant of basic tenets of technology, even greats like the West Wing’s CJ Cregg or Sports Night’s Dana Whittiker. But Bloom never suffers those traits. Elba brightens up the screen every time he pops in and it’s their playfulness together, though supremely platonic it should be noted, that proves fascinating.

Supporting performances from Kevin Costner (as Bloom’s aggressive father), Michael Cera (as Player X, though probably really Tobey Maguire) and a handful of others (Brian d’Arcy James, Bill Camp, Graham Greene, Angela Gots, Chris O’Dowd, Jeremy Strong) pepper the movie with a number of interesting turns. Sorkin acquits himself nicely in his first time directing, nothing felt overly directorly (a problem with first-timers usually) or poorly paced. The biggest issue of the film overall is its length. It’s definitely about fifteen minutes too long, but I’d be hard pressed to find too much to cut out. Okay, maybe the ice skating. The poker elements were fun for a small-time poker fan like myself, even as the voice-over worked so hard at explaining stuff I already knew.

It’s a fun movie, that also plays into the current zeitgeist of feminine strength against male toxicity. Would Tobey, I mean Player X’s aggression have been as strong if it wasn’t a woman telling him no? Would Molly’s path have been different if it wasn’t only men that were constantly belittling her? Hard to say. But whether it’s as feminist think piece, or just an engaging retelling of a modern-day Icarus, Molly’s Game is a winner (I’m resisting the urge to go for a full poker metaphor).

One response to “Molly’s Game”