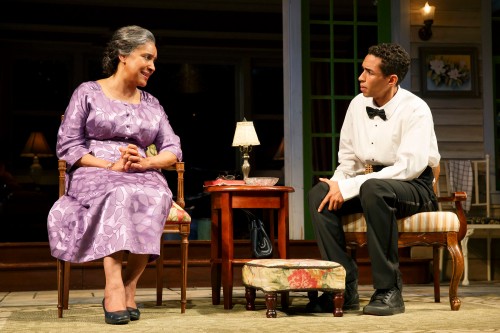 As I took my seat for Head of Passes at the Mark Taper Forum, the new play from Tarrell Alvin McCraney (Oscar winner for Moonlight screenplay), I took notice of the set. Always the first indication of what’s about to unfold, the set depicted a beautiful living room opening to a sunroom suggesting a peaceful family scene. What unfolded was not quite that.

While the first act waffles between the comical, the farcical (a leaky roof drowns the set throughout) and the dramatic (Cookie brings the drama), the second act features Rashad swinging for the rafters and delivering a tour-de-force performance that is nearly an entire act soliloquy. Rashad is phenomenal here. Watching her, railing at unseen forces was one of the greatest things I’ve ever seen on stage. The rest of the ensemble is great but the show belongs to Rashad.

With allusions to the bible, Passes bends towards the extreme in a couple instances, but anchored with solid performances, some amazing set work and solid writing, Head of Passes is a truly remarkable play.