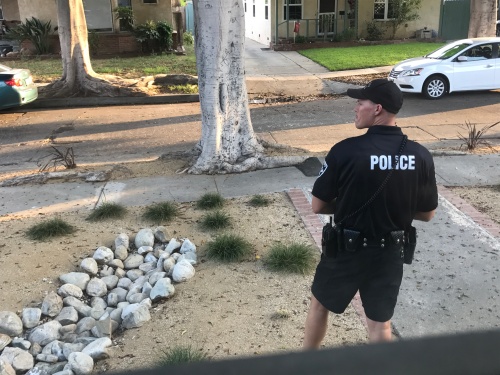 Sometimes, excitement can hit you from different places than you expected. I thought my Saturday evening excitement would come from the game night I was about to host, but then the police came to my neighborhood. Now, I’ll be honest, other than the police officers I know, the sight of that uniform doesn’t instill confidence in me. It’s mostly fear, even though I’m white and generally law-abiding, I still have a long-ingrained apprehension when it comes to cops. It may not be fair, but there it is. So, when my neighborhood was overrun by dozens of police officers, I was curious and wary mostly. But let me go back.

I was in the midst of prepping for my friends to show up when I was first clued in by the sounds of multiple helicopters overhead. I’m right be the freeway so I just assumed there was a car chase going on, which turned out to be true. My friend Kecia gave me a call and told me she was at the end of the block but that she was stuck between two police cars and that four cops just jumped out guns drawn. She took a spin around the block and made it to my driveway. A conclave of neighbors was forming right by my driveway so we both joined them. As we compared notes and questions, we noted that both ends of our block had been swarmed by police vehicles. Then, a couple of bike cops rolled up and told us to get back into our house.

Having no clue what was going on I proceeded to shut and lock all my doors. Sometimes, I don’t even close my back door when I leave the house, so this was a big move. Safety first. I texted my friends that there was a doins going on in my hood and to warn them to maybe not be so timely if they didn’t want to run into the drama. Well, some of my friends were never going to make it on time, while others did what I would do in this situation: they raced over to see what was going on. I scanned the news on TV and twitter and there was nothing indicating what was going on. I assumed (wrongly) it had something to do with the drug dealer house about five doors down. I don’t know for sure that they deal drugs out of there, but throughout the day there are cars just stopping by for a few minutes. All. Day. Long. But the action appeared to be focused on the other side of the street.

My other friends arrived, bursting into the house, quickly camping by the windows to watch. Kecia and I went out the front door as we saw some officers walking by. They told us to get back in our house as we heard a megaphone from one of the helicopters blare “come out with your hands up. Drop your weapon.” So, yeah, back inside. Deadbolted. Twice. Other friends of mine were at the end of the block, the police refusing to let them through.

One of the bike cops planted himself on my lawn (see picture above) and drew his weapon (a taser, so I felt okay still watching). So, there we were, four people standing on fancy chairs, gripping the window ledge and scanning the neighborhood. Then there was running. The other bike cop took off in a quick sprint and a few houses up we could see a man on the ground, surrounded by five cops. And then, it was over.

We first saw one of my neighbors across the street emerge from his house. We were not the only looky-loos. The cop in my yard joined his friends so my friend Bryan went outside and positioned himself in my yard, just casually having a stand. A few moments later a group of cops (and a dog!) came strolling down. Bryan stopped them and asked a question, so I jumped off the chair and went outside, very nonchalantly I’m sure. I could hear one of the cops say “don’t worry we got the guy,” as I made my way closer. “What happened? Can I ask?”

The cop hesitated for a second then said, “some gangbangers at the mall. They stole some shit, took off in their car. They exited on Culver (the street at the end of my block) and one of the guys jumped out of the car and ran through your neighborhood. He was armed. But we got him and the gun.”

And then he kept on walking.

I muttered an empty “thank you” as I watched the group get stopped by another neighbor a couple doors down. The whole thing lasted maybe half an hour and then it was just done. The helicopters pulled away. The gaggle of police (I know it’s a murder of crows, but what’s a group of cops?) piled into their cars, SUVs, or boarded their bikes and then my neighborhood returned to the quiet (well, as quiet as you can get next to the 405) little unassuming little hood it usually is.

At no point did I actually feel like me or my friends were in any danger, even afterwards knowing an armed gang member was within a few car lengths from my house. Despite the confusion and chaos in those moments, there was nothing that provided any obstacle to getting back to normal. So much airtime and energy in the world right now is spent is trying to make us afraid and angry but the biggest thing I took away from this event was interacting with my neighbors, something I have never really done. Well, that and when I left the house today I made sure all the doors were locked and the alarm was on. I’m not completely immune to fear.